Boone County will soon have upgraded facility for dispatchers 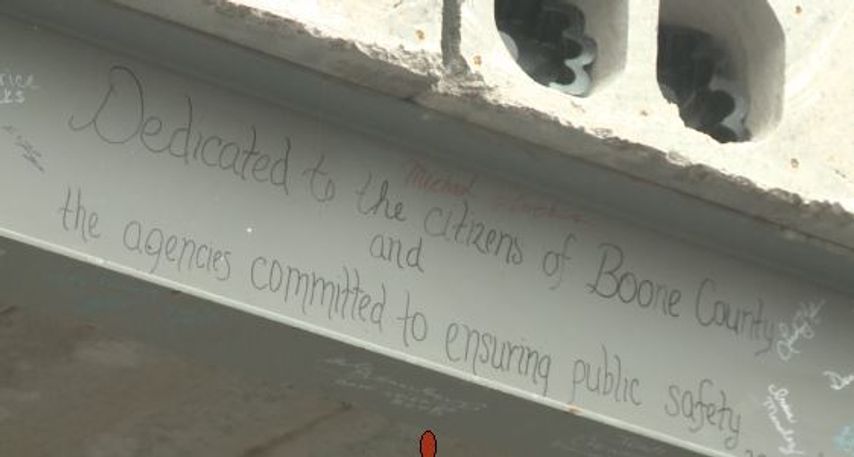 BOONE COUNTY - 911 dispatchers will soon have a new facility to help respond to emergencies faster.

Future visitors to the Boone County Emergency Communication Center will be welcomed with a dedication beam. This beam was signed by people who were involved with the center's construction since day one.

The project touches almost all Boone County's offices. Director of Boone County Joint Communications Chad Martin said among the people who signed the beam were the 911 staff, office of emergency management, police, fire, and EMS agencies the center serves, the construction company, county staff, IT, and other county offices involved in the process.

Before he became director, Martin worked with the sheriff's department and previously as a 911 dispatcher. He said he is excited for the new technology that has been long overdue.

"I'm excited about it. It really provides a lot of opportunity to grow, and get new technology, and increase personnel for a much needed center," he said. "We provide a high level of service now, but what it provides is space that we don't have in the current center."

He said the tax will also make technology upgrades possible.

"We're operating now on some antiquated software and hardware," he said. "Getting all new technology going into a new center. It's going to be great."

He emphasized the addition of personnel and technology.

"I think the additional personnel will be noticed. Over the years, there has been an increase in call volume and 911 calls. And the increase of staffing on the 911 side will help spread that out and a lot of resource to help the public safety entities much better," he said.

He said the most important is now there will be more room to train new dispatchers.

"Some training space and testing space for applicants. Right now, we're really, really cramped in the area we're at right now," he said.

He also said there will be a room where dispatchers can rest and seek shelter if there is bad weather.

Boone County District II Commissioner Janet Thompson said there were slight changes made to the project, but it is still within budget.

"It's a minimal amount of change orders that have happened, but we are well within budget and proceeding pretty much on target," she said. "Part of the process of building a building that large is you just have things that have to be changed. You know you didn't realize, 'Oh my goodness, we have to have a different camera here that is not going to fit in that place because of how the building is configured'."

There were also 45 rain days that delayed the progress of the project for some time.

"We now will have a building that will house both 911 operators, the whole staff, as well as a new emergency management department," she said.

She said there will be a new Emergency Management Director, Terry Castle, and Martin as the new joint communications director .

"The two of them will lead the whole project of ensuring that Boone County is safe, that they get great service from all the service providers, and that in fact we as the interface of that, as the 911 staff, as the emergency staff, we can help that process come to flourish," she said.

She said she is most excited about having both emergency responders working together.

"It's wonderful that we will have a home for 911 and emergency management together because they are the mechanism by which we keep Boone County safe," she said. "This is a building that will withstand any kind of crisis situation and no matter what the service providers and the Boone County government will be able to keep our folks as safe as possible."

The  Columbia Chamber of Commerce's Ambassadors held the ribbon-cutting ceremony on Friday. The center is funded by the 3/8 cent sales tax that Boone County voters passed back in April 2013.

Commissioner Thompson said the center is expected to be completed by June 2017.

Below: Crews placed the dedication beam in the Boone County Emergency Communication Center on Friday. It was signed by people who were involved with the center's construction, including 911 staff, office of emergency management, the construction company and other county offices. Photo: Fan Feng.