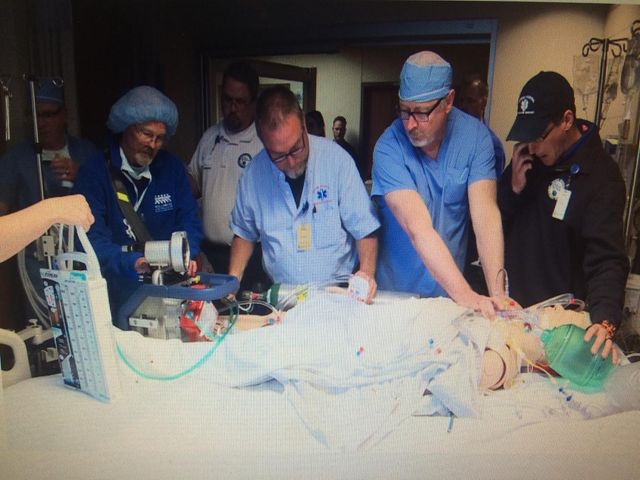 COLUMBIA -When a patient goes to Boone Hospital Center in Columbia with a life threatening condition the doctors and nurses there now have one more tool. Doctors say a new, smaller, transportable heart-lung machine will likely help save lives, and it can be used to help treat a variety of ailments ranging from a severe flu to cardiac arrest. Boone Hospital Center is the first in the state to have the device.

"We have medications, we have a ventilator, but this extends the limits of that to be able to actually oxygenate the blood, pump the blood. It replaces either the lungs or the heart and lungs together," Dr. Richard Mellitt said.

Extracorporeal life support, or heart-lung machines, are not new. However, the machine recently purchased by the hospital is much smaller than what it has used in the past, which gives doctors more options. The much larger device the hospital typically uses during surgeries is meant to last 4 to 6 hours.

"This device allows us to support someone not indefinitely, but for a much longer period," said Certified Clinical Profusionist Michael Phillips. "There's reported cases of 4 months with a survival and sending someone home."

Phillips estimates at least 20 patients a year will benefit from the hospital getting this machine.

While the staff at BHC hope to be able to offer better treatment and keep patients in mid-Missouri with the device, it can also be used to transport patients more safely to other hospitals if the need arises.

"Before we would have to support them with what we had or try and transport them to another facility. In the meantime their health is deteriorating because of the timelines of what we need to do with this device," Phillips said.

"I think the future of this is great in that I'm sure there are people who will survive because we have this," Mellitt said.

The staff at BHC has spent the last month training on the new device and will be able to start using it on patients June 1st.