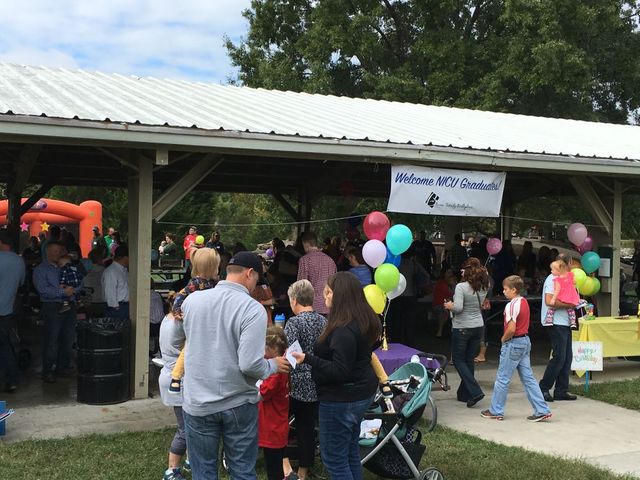 Nurses, families and their growing children went together for fun, games, treats and a traditional group photo.

In 1996, Boone Hospital Center began caring for preterm, low-weight and critically-ill babies in NICU. Due to a need for expanded care in mid-Missouri for babies born before 35 weeks, the NICU formed to reduce the number of transfers for special care.

"The reason we come to this every year is because we had people who just loved on us and cared for us and supported us, and that makes it a lot easier," she said. "It's so nice to have people who will sit and let you cry with them and then turn around and also be caring for your baby."

NICU has also taught parents how to care for their newborns and understand their unique needs. The unit encourages families to visit often and participate in their baby's care, including Kangaroo Care and reading to their babies.

Brady Gardner, a 14-year-old student at Jefferson City High School, was born at one pound and four ounces. He went through the intensive care unit. His mother said he spent over 100 days in NICU.

"They said a less than 20 percent chance that he would make it, and that he would more than likely have mental and physical disabilities," she said. "Now, he's got straight A's and he is perfect, and we couldn't have done it without the NICU."

In 20 years, there have been many improvements and additions to technology to help babies in the NICU get well and go home with their families, but neonatologist Tim O'Connor notes the compassionate care for babies and families at Boone Family Birthplace really makes the difference.

"It's been a long journey and it's really rewarding to see these people come back, particularly the older ones," he said. "It recharges the battery of all the nurses and docs in the unit to see why we do what we do."

However, as much work as his staff need to do, he said it's the parents who have done a great job.

"We have them for a short period of time, and the next decade or two it's up to them," O'Connor said.

"It's neat, I was thinking about last night, about who we were going to see out here," he said. "It keeps you going at 2 o'clock in the morning."