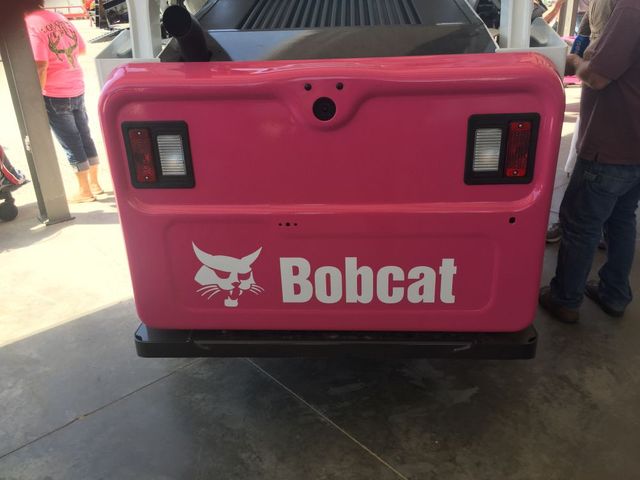 BOONVILLE- What began as a joke between two friends inspired an event that raised money and awareness for a very serious cause.

Darren Ridgeway, salesman of Bobcat of Columbia and Mark and Linda Mellor, owners of Mellor trailers had an event Monday in Boonville for cancer awareness.

The event was a fundraiser for cancer and Relay for Life. It also allowed for survivors and their loved ones to be able to eat, mingle and sign a special pink Bobcat trailer designated for those who had or survived the disease.

Ridgeway said the event turned into something accidentally, because it began as a joke.

"I had our marketing guy, David, take a picture of a machine, and we photo shopped the rims and the bucket pink. We sent it to a radio personality and they started talking about it live on the air. And then it just took off from there. Other people were willing to get involved and it turned into the event we have today," said Ridgeway.

Mellor said he thought the joke was a great idea but for a more sentimental reason.

"I lost my parents very young to cancer. My wife and I thought it'd be really neat if we accepted the Bobcat with pink bucket and pink wheels. We announced to them the only way we would take it is if they did it pink. So that's how this got started," said Mellor.

Relay for Life was also there selling t-shirts, literature and raffle tickets for different prizes.

Elaine Grallisch, owner of Country Cuisine Catering and Relay for Life representative, said she has been dedicated to this cause for years.

"I've been affiliated with Relay for Life for 21 years. Our sister has cancer and is a survivor and so are many of my friends, so I was so happy when Mark called me about this event," said Grallisch.

Relay for Life has an event this Friday at Cooper County Fairground from 6 p.m. to midnight.

The event was sponsored by Mellor Trailers, Bobcat of Columbia, Relay for Life, Trailerman Trailers, Country Cuisine catering and Central Missouri Auto-body and heavily promoted by Matt Billings of 1370 AM KWRT radio and Jack Daniels of 97.7 FM KPOW radio.

In addition to many donations, Jim and Lisa Hackman pledged one thousand dollars for 97.7 fm radio personality, Jack Daniels, to put on a pink bikini in support of the cause.

This is the first time they have had this event, however they are already having conversations about making it an annual event.