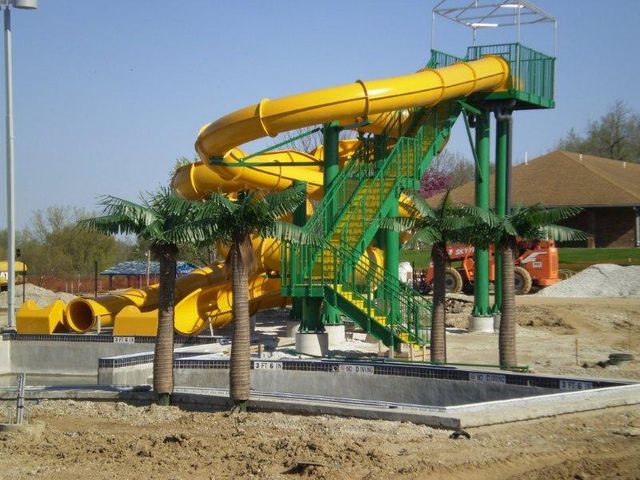 BOONVILLE - Despite the cloudy weather, residents came out for the grand opening of Boonville's Lions Park Aquatic Center on Saturday. The new facility boasts a 9,280 square feet area where people can swim or make a splash. The swimming area includes two 1-meter diving boards, a 25-meter competition pool, open flume slide, lily pad and spray ground. The park took nearly 9 years to plan and is funded by the gaming revenue the city receives from the Isle of Capri Casino.
The park is located at the site of the original city pool at 1207 Eleventh Street where contractors removed the old facility and built the new park entirely from scratch. Park officials say they paved a new parking lot where the old pool once existed. The current facility employs nearly 30 workers and will begin offering swimming lessons weekdays for children. (Photo: City of Boonville)
Officials from Boonville's Parks and Recreation Department decided to keep two tube slides from the former pool. The slides were not in operation on opening day because officials say they still need to finish installing the plumbing on each slide.
Even though the park is open to the public officially, contractors still need to finish construction on a retaining wall near the park. When the finishing touches are complete, park officials say the project's cost will be $3.5 million.