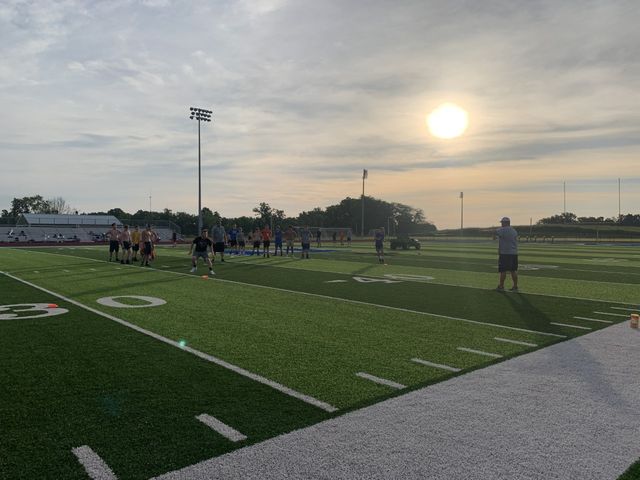 BOONVILLE - The Boonville Pirates returned to the football field for practice Monday.

Greg Hough is entering his third year as head coach of the Pirates. With growing skepticism surrounding the 2020 fall season, this year is going to be unlike anything the team has seen, Hough said.

Boonville finished with a 7-4 record last season. They lost in the Class 3 State Tournament to the 2019-20 champion, the Odessa Bulldogs.

Incoming senior Andrew Wiser said he hopes to be back on the field and be able to play out his senior season.

"It's a hard feeling because we really want this season," Wiser said. "Last season didn't end how I wanted so I'm really hoping for a season this year."

Skepticism is growing over the fall sports season, with some players concerned they may suffer the same fate as spring athletes. Wiser said they don't know what to expect.

"I'm feeling good but we're just hoping to have a season cause of all this COVID going around," Wiser said. "It's kind of scaring us a little bit but we're going through it.

These circumstances are unusual but Coach Hough said it's important that athletics be a part of the community.

Even if the season doesn't go as planned, Coach Hough said Boonville's staff is still going to help the students as much as they can.

"Some of our kids are trying to play ball at the next level," Hough said. "If we don't have a football season and can get with our kids [within distancing requirements] then we'll do whatever we have to do."

However, no one knows what that looks like right now.

"As for [if the season is canceled], I couldn't tell you what that might be," Hough said. "Right now, it's helping them get prepared for the season and be great. That's the mindset I want to preach to the kids. No matter what it is, attitude and effort, give the best you got."

The Pirates are still planning on playing their season opener as scheduled at home against Pleasant Hill on August 28th.