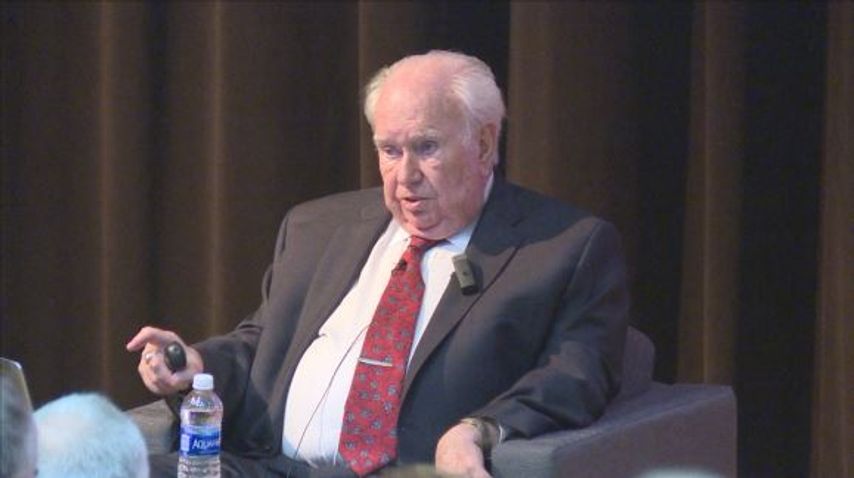 COLUMBIA – Botanist and conservation advocate Dr. Peter Raven gave a presentation on global sustainability Tuesday at the University of Missouri.

Raven said the think tank Global Footprint Network estimates the world is using about 174 percent of the world’s total sustainable productivity, meaning there needs to be 1.74 Earths to get the amount of resources the population demands now.

“In a world where an estimated 800 million people are malnourished and 100 million are at the edge of starvation at any one point, we’re still way over the top, and that’s a situation that can’t really continue,” Raven said.

Raven said many species of plants and animals are being driven to extinction at a rate comparable to the period when dinosaurs went extinct 65 million years ago.

“That’s why many people are starting to call this period the sixth great extinction of life on Earth,” Raven said. “Earth is 4.5 billion years old. To have one of the six great extinctions going on in our lifetime is pretty impressive, pretty damaging for our future since everything about our lives is based on the properties of living organisms.”

The lecture was part of the Jerry Litton Lecture Series honoring the former congressman who graduated from MU and advocated for the rights of farmers. His family organized a foundation after he died in a plane crash following his U.S. Senate victory.

“We worked hard to find those types of lecturers that do make an impact on this country and this nation, and bring them to the local campus,” said Edwin Turner, Vice Chair of the Jerry Litton Family Memorial Foundation. “These students, faculty, staff and the citizens of this state can hear first-hand the thoughts and ideas about not only the environment but the importance of agriculture and importance of feeding the world.”

Raven served as president at the Missouri Botanical Garden in St. Louis for nearly four decades and was a member of President Bill Clinton’s Committee of Advisors on Science and Technology. He received the National Medal of Science in 2001 and previously served as president of the American Association for the Advancement of Science and American Institute of Biological Sciences.

At the event, the foundation also recognized College of Agriculture, Food and Natural Resources students who joined the Litton Leadership Scholars Program. Members of the board of directors presented the students with a pin to commemorate their completion of the program.