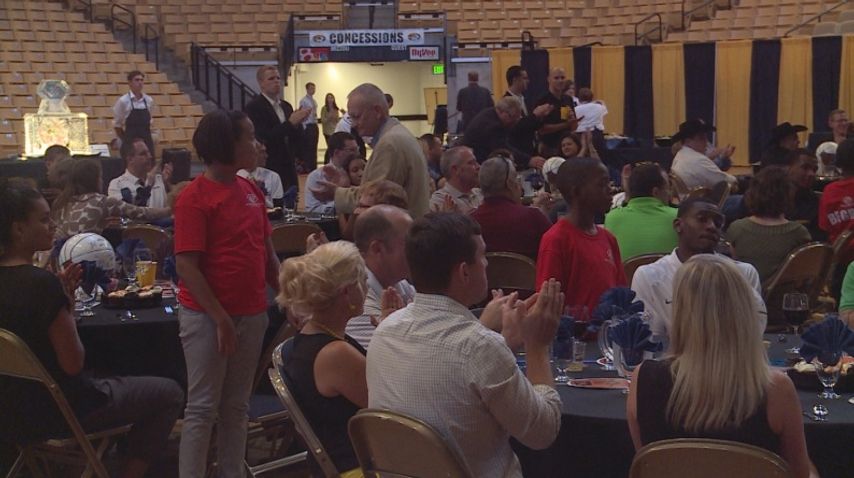 COLUMBIA - Over 300 guests gathered Thursday at Mizzou Arena to show their support for Boys & Girls Clubs of Columbia at its second annual MFA Oil Hoops for a Cause fundraiser.

The atmosphere at the arena was cheerful as kids from the club got the chance to meet and talk one-on-one with this season's Mizzou Basketball players.

This year the organization hopes to raise $75,000. All of the proceeds will go to the local chapter.

Valorie Livingston, Executive Director of Boys & Girls Clubs of Columbia, said Thursday would be a unique experience for everyone.

"You get to meet the season's players and also get to meet the kids and be able to see your money directly who is going to benefit, makes it really special and very personal," Livingston said.

One of the main supporters at the event said this venue provides multiple opportunities to meet other donors who are contantly showing their appreciation for the program.

"We are all here for a good cause and that is to support our children and provide for them a better future through mentorship," Thomas Cutler said. "As a donor, I'm really happy for the turnout and the incredible atmosphere that such a program gives."

The organization's goal is to service 600 children at the end of the year. Livingston said every year more children are in need of help.

"We know the free and reduced lunch price count for Columbia Public Schools district is well over 40 percent which really means there is well over 6,000 kids that need safe and run and positive place to go after school," Livingston said. "And we provide opportunities for them that they might not otherwise have."

The night ended with a shooting competition among the various sponsor tables. At each table one donor shot a free throw, a Boys & Girls Clubs kid shot a lay-up and a basketball player shot a 3-pointer.

The organization currently serves over 500 youths a year.

An excited face from the Boys and Girls Club of Columbia Missouri looks on at the Hoops for a Cause event on Thursday, Sept. 25, 2014, in Columbia, Missouri. Over 300 guests gathered at Mizzou Arena to show their support.

A basketball signed by the Mizzou Men's Basketball team sits as the centerpiece on each table of the Boys and Girls Club of Columbia Missouri's Hoops for a Cause event on Thursday, Sept. 25, 2014, in Columbia, Missouri. Over 300 guests gathered at Mizzou Arena to show their support.

Mizzou Men's Basketball Head Coach Mike Anderson greets the children of Boys and Girls Club of Columbia Missouri at the Hoops for a Cause event on Thursday, Sept. 25, 2014 in Columbia, Missouri. Over 300 guests gathered at Mizzou Arena to show their support.