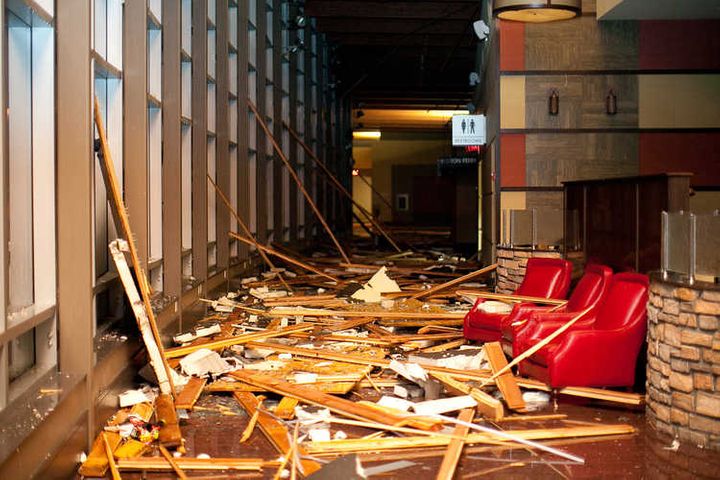 BRANSON - The city of Branson was piecing back together today, after an F2 tornado ripped through Missouri's tourism capitol early yesterday morning. For one family living on the main strip, the storm not only hit close to home - but hit home itself.

Wedged between businesses on Branson's famous strip - past the Branson Mall, past the devastated hotels, past the torn up restaurants, between the fallen power lines - you'll find the Nelsons.

The Nelsons' house is  right in the middle of the commercial area that was the path of the tornado that ripped through the heart of 76 Country Boulevard - eight miles of destruction.

"There used to be a porch right here. We found it - about 60 yards on the property over here," homeowner Martin Nelson explained.

"This is a lot of damage - the insurance issues here, the property damage issues here are going to be significant," Governor Jay Nixon said.

"We've lost the use of all three of our vehicles," Nelson said.

"We put a brand new roof on his house last year, and as soon as I saw the devastation on TV this morning, I called him up and asked how our roof was. And he said, 'What roof? The roof is gone, the porch is gone,'" carpenter Mike Lavender said.

The tornado hit businesses and shows around 1:30 a.m., which spared many lives with most safe at home, safe in bed.

But for Martin and Betty -

"I heard a boom, I felt glass, I dove immediately off of the bed, " Nelson said.

Bed - is where fear began.

"I was scared," Nelson said.

"It was the biggest fear of not knowing what was going on around us. We could see people with lights walking up and down, and we didn't know if they were looting or if they were officials," Nelson said.

"Then it kept lighting and raining, and it was like - is this the beginning of something bigger or was this the final blow of...I don't know, i'm speechless, " Nelson said looking out the window, shaking his head. "Just grateful that one of those limbs from that tree didn't come flying through and hit one of us."

To the Nelsons, it was more than just a tree.

"I never thought that anything would ever knock that magnolia tree down," Nelson said.

"People used to like to stop and get their picture taken by the tree - special occasions, you know.... It was kind of like a conversation piece, and now it's destroyed," Nelson said.

"There will forever be pieces of broken glass in here," Nelson said.

Broken glass, but no broken spirits.

"This can all be fixed. It's a lot of work out here but, we'll just do the best to get along and pick up the pieces from here," Nelson said.

To find out ways to help Branson Recovery, click HERE.