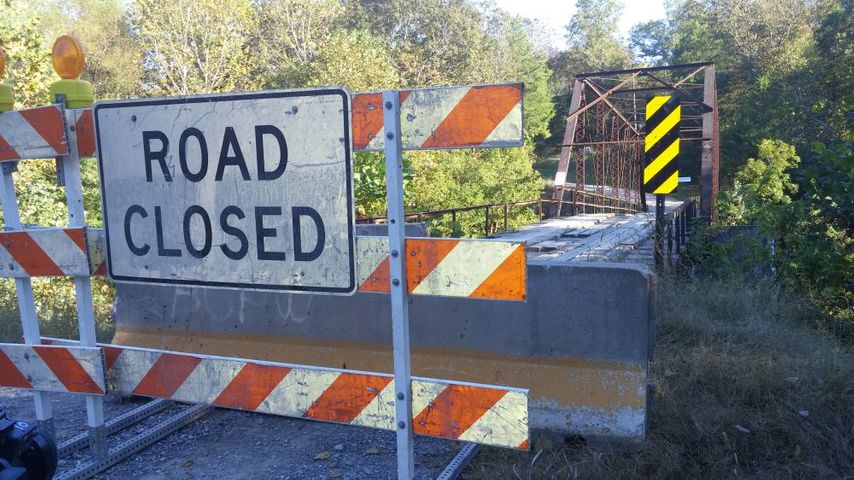 BOONE COUNTY- Boone County shut down a century-old bridge Friday with only a few days notice, which left residents scrambling to find an alternate route.

The Burnett School Road Bridge over Cedar Creek in southern Boone County used to let travelers cross between Callaway and Boone counties. Boone County Resource Management closed off access because the bridge, which was built in 1909, was deemed unsafe after a recent inspection.

Derin Campbell is the chief engineer for Boone County Resource Management. He said the press release for the bridge closure was sent to the public Wednesday.

"The bridge was closed because it's kinda nearing the end of its life span the last four, five years," Campbell said. "This year it didn't pass a minimum load rating, which is three tons, which is basically the equivalent of a pick up truck."

That means the bridge might give way because it cannot handle the weight of multiple cars going over it at once.

Campbell said, "An occasional load can drive across it and probably be OK, but on an everyday basis, there is a high probability that the bridge could collapse."

Renee Mapes lives near the bridge. She said she appreciates the government trying to keep them safe, but said it "should've done a much better job" by giving residents more notice. She said the signs were put up only a few days ago and residents only found out through a neighbor who worked in the government and had inside knowledge.

Carl Freiling also lives by the bridge on the Boone County side.

"It's probably a mistake to close it," he said. "I've seen the use really, really increase."

But Campbell said as few as ten to 60 cars used the bridge daily. He said replacing the bridge could cost as much as one million dollars, but right now the county isn't sure that it's worth the money.

"That's a significant investment for the current vehicle count," he said.

One resident KOMU 8 News spoke to who lives on the Callaway County side said she's upset about the closure and how little notice the county gave residents. She walked across the bridge Friday to meet her friend who lives on the other side because it would take her much longer to find a way around the closed bridge.

KOMU 8 News covered how a group of Ashland residents wanted to save the bridge in 2014. According to that coverage, about 70 people lived on the Callaway County side of the bridge and used it to commute to Boone County.

Residents told KOMU 8 News back in 2014 that if the bridge closed it would create a safety risk because it will take longer for emergency vehicles to get to the other side of Cedar Creek.

They also said the closed bridge means one less escape route for residents in case there is a forest fire.

Campbell said the next step for Boone County is to do an analysis of exactly how much the bridge will cost to replace or repair.

(Editor's note: This story has been edited for clarity.)

Ashland Residents Fight to Save Bridge