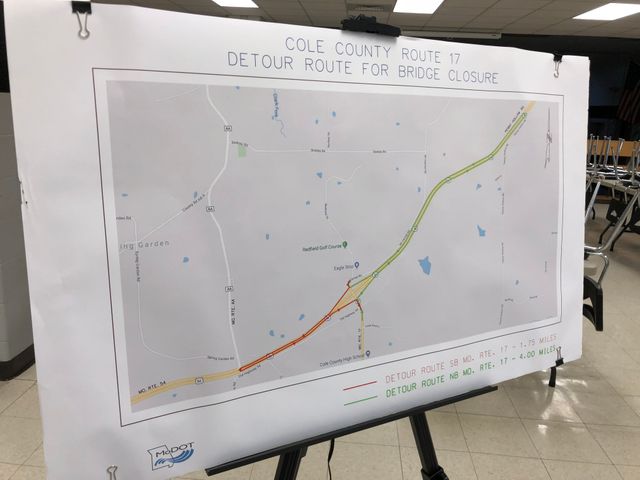 EUGENE- Upcoming bridge repairs along Route 54 will cause detours for drivers in Miller and Cole counties.

The Missouri Department of Transportation says it plans to renovate nine bridges this fall, causing a four-mile detour at the Route 17 bridge over Route 54.

The project was discussed during a public meeting in Eugene Wednesday. MoDOT representatives were available to answer questions from area residents.

“You’ll notice as you drive over some of these bridges that they’re starting to get potholes that’s been repaired. They’re not always really that smooth. This let’s water get into the bridge deck and accelerate the deterioration,” he said.

According to MoDOT, Missouri has more than 10,000 bridges throughout the state, and 863 of those bridges are in poor condition.

Hughes said the detours should last around three weeks. He also said, without the detours, construction could take up to two months longer.

“People like for us to just close a bridge for three weeks and get it done, and it’ll be opened up for traffic as usual,” Hughes said.

Although most residents are in favor of the bridge renovations, Julie Berhorst said she’s afraid of what the detours will do to her daily commute on Route 54.

“I commute on 54 every day and night. I know it’s not a lot, but enough that I would have to think about it in the mornings,” she said.

Hughes said construction on the bridges will begin in fall 2018, with plans of having all bridges renovated by fall 2019.