Brumley couple on storm damage: "There was no warning" 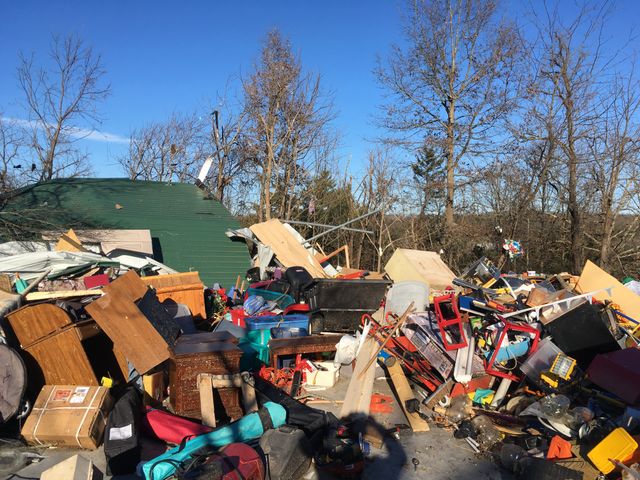 Update: The National Weather service confirmed a EF-1 tornado hit Miller County Monday night. There was no severe thunderstorm or tornado warning at the time of the storm.

MILLER/COLE COUNTIES - A couple in Brumley came home from dinner last night and couldn't believe what they saw. Homeowner Billy Watson was driving with her husband when she asked him, "Isn't that our ceiling in the road?"

"Devastation," she said. "We got home last night. We were like there’s no garage left. All of our Christmas ornaments, decorations, balloons are now who knows where - destroyed. I just feel devastated."

The couple said they had noticed it raining earlier in the evening, but saw no damage on the way home, until they pulled into the driveway and were blocked by a fallen tree. That's when the noticed half of their roof and their garage had been completely destroyed.

The Watsons had just finished putting up Christmas decorations, with more than twenty different inflatables filling up their yard. Rudolph, The Abominable Snowman and a nativity scene are all that's left.

"It was just a shock as to where did this come from. There was no warning. There were no warnings out. No rhyme or reason why we would come home to this devastation."

Multiple trees were uprooted and sheds destroyed, and Watson said part of the roof ended up down the street in a neighbor's yard.

The couple live with four dogs and said they were miraculously unharmed during the storm.

The two said all they can do is pick up the pieces and keep moving forward. With the help of Billy Watson's mother, the family spent Tuesday playing Christmas music as they tried to salvage anything that they could.

KOMU 8 News reached out to Miller County's Emergency Management Director Barlow Biggers to see if there were any other reports of damages and Biggers said he had nothing to report besides a few upturned trampolines.

Jefferson City's Second Christian Church had the roof torn off of its annex at the corner of Lafayette Street and East Dunklin Street. Multiple trees were uprooted. Crews spent much of Tuesday restoring downed power lines.