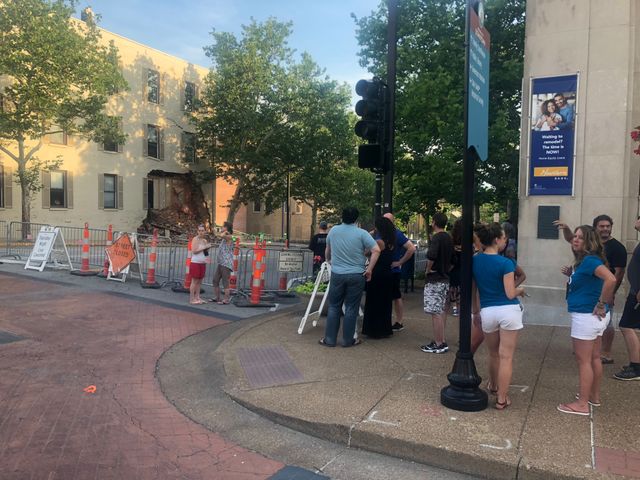 JEFFERSON CITY - Thursday Night Live, a concert event downtown, is canceled for this evening after a building next to the stage collapsed Thursday morning at 10 a.m.

Turnbull & Stark Law Office, the building that started to collapsed, is located on the corner of East High Street and Madison Street. The Thursday Night Live crew usually sets up the stage the night before and then uses electrical outlets behind the building for its power source.

John Hickey, owner of Wise Production, said he usually sets up the sound and lighting around 10 a.m. That's when he heard noises sounding like construction and noticed a plume of smoke.

"When I pulled up and I noticed the smoke. It had just occurred and within seconds, people from the building came out of the building and were looking to see what had happened, other pedestrians that were nearby started to migrate that way and started to look and take notice at that point."

The Thursday Night Live crew was disappointed the event was canceled, but it is more concerned for public safety.

The crew says it will look at its other options for a different location for next Thursday.

Police, firefighters, and building engineers were at the scene to block off the area for safety precautions. They used bike racks, originally for the event, as makeshift barricades. Officials said everyone was able to evacuate the building safely without injury.

Lieutenant David Williams of the Jefferson City Police Department said the building still has visible stress, so they want to make sure the public stays away from the area.

"We're going to try and get some more stable side to the building. We don't know how long that's going to be before we can say that the building is safe," Williams said.

The building has progressively gotten worse as the hours have passed by.

Steve Morse, resident of Jefferson City, said his grandfather used to rent the building, for over 48 years. He has been waiting with other bystanders to see if and when more of the building will fall.

"I think it's sad. It's no other fault other than construction, you know after so long a time there's been obviously some problems with maybe water, moisture getting in the brick, and getting behind it and causing some structural problems there. It's sad to see. I hope they're able to save the building," Morse said.

Officers moved the barricades to the end of Madison Street. They will stay to make sure nobody goes in or near the building.