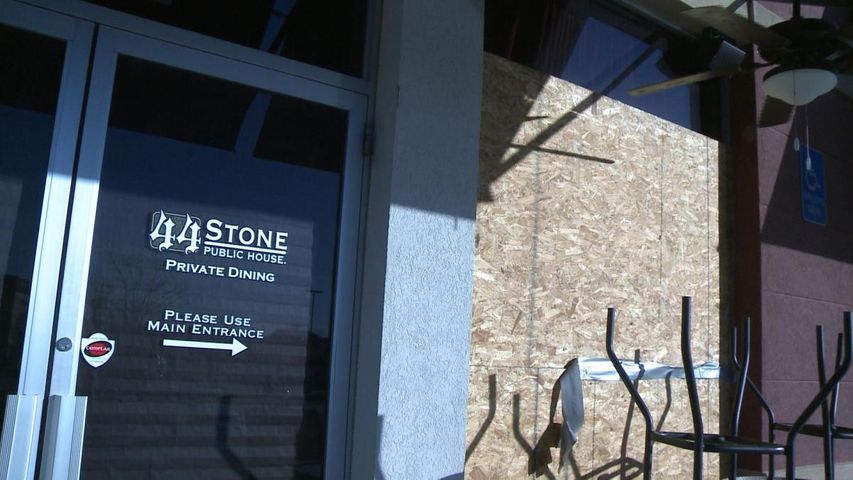 Police responded to the incident just after midnight in the 3900 block of Peachtree Drive.

Officers arrived at the scene and found several shell casings and damage to the restaurant from gunfire. Columbia Police said the suspects fled the scene in a vehicle and were pursued by other officers.

During the pursuit, a Columbia police officer drove over ice and crashed into a ditch. The accident occurred at the intersection of Grindstone Pkwy. and E. Green Meadows Rd. The officer was taken to the University of Missouri Hospital and Clinics, where he was treated for a severe contusion in his left shoulder.

One bullet shattered a window at 44 Stone Public House, soared across a dining room, through the office wall, and hit a bookcase one the other side.

The restaurant did not have customers inside the small dining room when the shots were fired but Marti Hancook, a waitress at 44 Stone, was.

"Just as I was about a foot away, I heard a couple of pops and the glass just shattered in front of me," said Hancook.

Dave Faron is the co-owner of the restaurant. He said he heard there was some kind of an incident at a restaurant down the street. He said one party in the incident drove away then came back, parked in his parking lot, and opened fire on the other party. Then the other party shot back.

Faron also said he was still shaken up by the incident and the potential danger to his employees and customers.

"To say we dodged a bullet there is a, I'm not trying to be funny, but if it had happened any earlier there could have been someone seriously hurt," said Faron.

Both Faron and Hancook said they hope that people won't feel unsafe coming into their restaurant and that the police will get to the bottom of the problem.