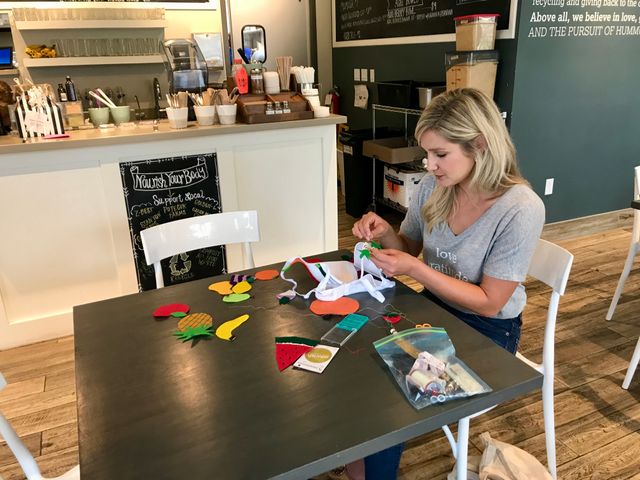 “As a cancer survivor, you kind of wear this badge. It’s something very difficult you go through, as is any traumatic life-changing experience, so when you get to the other side of it, there is this sense of pride and relief that you made it,” Ellis Fischel Cancer Center’s Outreach Coordinator Angela Winterbower said.

Winterbower plays a big role in planning one of Ellis Fischel’s most popular fundraisers, Artful Bra.

The fundraiser includes a bra-designing contest and auction that helps raise money and awareness for those who have been affected by breast cancer.

“We want people to be aware of the signs and symptoms of breast cancer,” said Winterbower.  “We want to encourage early detection. We want women and men to do breast exams and to get their mammograms.”

The fundraiser invites businesses, groups and individuals to design a bra that will be auctioned off for money.

The funds provide mammograms, medical supplies, transportation and assistance with medications and treatments for patients who are either underinsured or who don’t have insurance at all.

Participants enter the bras into a category of their choosing. The categories for the bras include artful artistic, decades, movies, funny, miscellaneous and recycled/repurposed.

This year, Columbia’s recently-opened café, Nourish, is entering into the miscellaneous category.

The café named its bra “Food is Medicine.”

“Food is so extremely powerful. It can either be the slowest form of poison, or the best form of medicine,” Lemone said. “Since we’ve opened that’s been one of our biggest goals, to support the health of our community and to educate people also in the process.

Nourish’s bra has veggies, fruits and a prescription pad that says “Food is Medicine” on it.

Lemone said, Nourish, being a healthy café and food market, has many customers with cancer.

“We actually have two customers that are both fighting breast cancer right now and this is a place where they can come in and know every single thing is clean and healthy,” Lemone said.

“It has become so important to them,” she said. “When we see those women come in, I can’t even describe the feeling… that we’re knowing that every single thing that we’re giving them is so incredibly healthy, while they are fighting for their lives.”

Nourish prides itself on making all of its food in-house. The café serves organic, nutrient-rich food with no preservatives, pesticides or chemicals.

“We just really want to get the word out there that there are other options. There’s a whole way of life to truly nourish your body and to have it be as healthy as it can possibly be,” Lemone said.

Nourish is one of many businesses entering the contest.

The seventh and final category of Artful Bra is called “People’s Choice,” which is the overall winner of the contest.

This is the eighth year of the event; Winterbower said they have raised around $30,000 in that time.

The event also has a “Tiger Cup” competition which is only for MU Health Care employees to enter. The winner of the Tiger Cup takes home a trophy that has been passed around every year.

Winterbower said a lot of cancer survivors attend Artful Bra because they want to “help other people and share in the fight.” Speaking at this year’s event will be cancer survivor, Kim Triplett.

Anyone is welcome to attend the event and to bid on the bras during the silent auction. The winners will be able to bring home their bra that night.