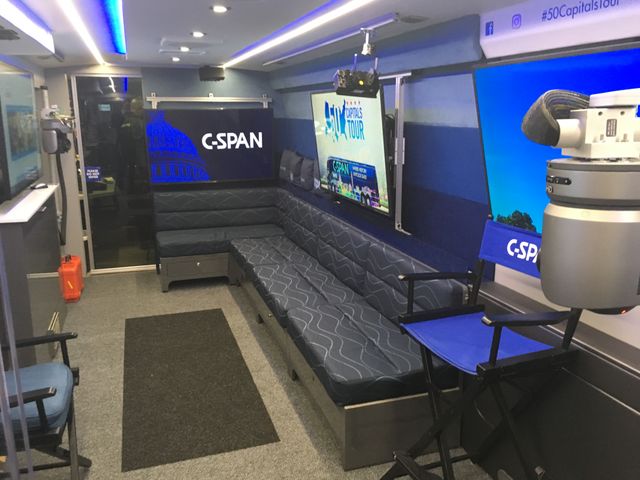 JEFFERSON CITY- C-SPAN arrived in Jefferson City on Tuesday to meet with local and state politicians and middle school students as part of its “50 Capitals Tour.”

The tour started in September and plans to visit all 50 states as what C-SPAN says is a way to engage teachers, students, elected officials, and viewers to showcase C-SPAN’s multiplatform public service resources.

The tour also includes a featured guest every morning as part of C-SPAN’s “Washington Journal” program. Tuesday's guest was Missouri Secretary of State Jay Ashcroft, who interviewed live from inside the bus’s fully-functioning TV studio.

Jefferson City Mayor Carrie Tergin officially greeted the C-SPAN team Tuesday morning after Ashcroft’s interview, where the bus was opened up for public tours in front of the state capital.

“We are very fortunate to have the C-SPAN bus here on their 50 State Capitols Tour,” Tergin said. “It is a great opportunity today for the kids to learn and kind of mixing history with technology  to also bring that all together with politics. Of course being here in Jefferson City politics are very important for us, so learning what’s happening is great for these students.”

“Our job is to really create a resource; C-SPAN can be used in and out of the classroom. So students come on board and they see the wow factor of the bus, but they are able to walk away with something they can use both inside and outside the classroom. So that awareness is very key,” Hemmig said.

C-SPAN is partnering up with cable and satellite affiliates across the country to bring its interactive bus to schools in each state. Hemmig said MediaCom is the reason they are able to visit Jefferson City middle schools Tuesday.

“MediaCom is a big reason we are here today. They hosted. They are picking the schools for us to visit, so we are excited to be there on behalf of the cable industry, but also just excited to visit with the folks in Jefferson City,” Hemmig said. "MediaCom invited us to visit these schools because of the teachers that use C-SPAN in the classroom. It’s our free membership service that has teachable video clips and lesson plans, so these teachers use our content and we going out there and show the students how to use C-SPAN.

Students and teachers also learned Tuesday about C-SPAN’s national documentary competition, Student Cam. The competition awards $100,000 in cash prizes. This years theme is called “CONSTITUTION & YOU” and asks students and teachers to “choose a provision of the U.S. Constitution and create a video illustrating why it’s important to you.”

"StudentCam gives young people across the country an opportunity to let their voices be heard," said Craig McAndrew, C-SPAN Education Relations Manager in a press release. "Last year more than 5,600 students from 46 states expressed their ideas and thought critically about issues affecting our country. This year we look forward to learning how the Constitution impacts students and their communities."

The “50 Capitals Tour” will be in Ashland and Columbia on Wednesday, and plans to visit all 50 states by November 2018.