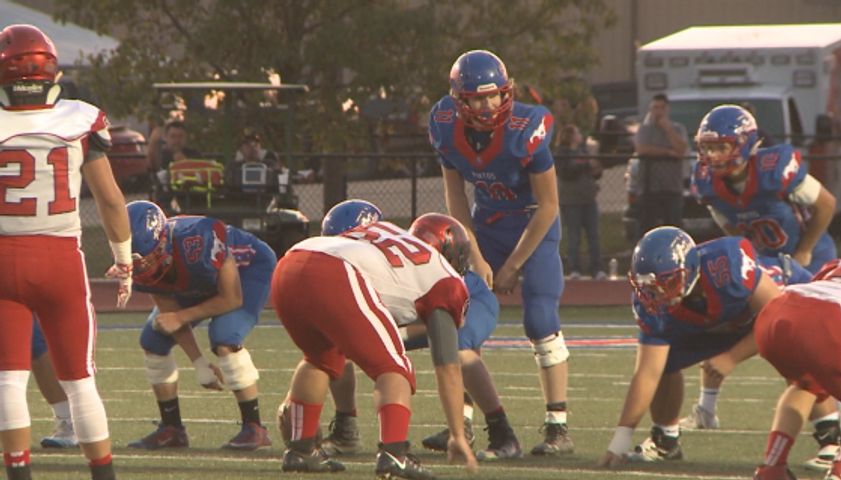 CALIFORNIA – Jacob Wolken was one of 11 seniors recognized from the California High School football team during last Friday’s senior night.

But unlike several teammates, he had not played in a game this season coming into the Pintos’ home finale. Wolken has been sidelined his whole senior season after tearing his left ACL in June football camp.

“It hit me pretty hard because I grew up with football, and put in all the work for it and your senior year is just gone,” Wolken  said.

Although Wolken has not been medically cleared to play this season, he captained and started one final home game at Riley Field.

“I took the pads off after I got hurt, and never really put them back on until that night,” Wolken said.

California let the clock roll on its first play of the game and took a delay of game penalty to allow Wolken to break out of a huddle and soak in a game atmosphere one last time.

“Last year I had a kid have a similar thing happen to him during the jamboree,” California head coach Mikel Gragg said. “ He got hurt and never really got to experience it, and I remember walking off after senior night going I wish I could have gave him something more."

Wolken hugged his teammates, opposing teammates and coaches in what turned out to be one of the most emotional moments of his football career.

“I tried to keep it together as long as I could, but being out there with the guys again, it just kind of got to me,” Wolken said. “I cried a little bit, and I some of the other guys kind of crying too, so it meant a lot to them and it meant a lot to me.”

Ken Wolken, Jacob’s father, can relate to the experience of being sidelined his senior season.

“I started freshman year because somebody else got hurt, started the first three years also, and my senior year I broke my ankle,” Ken said. “Same thing, different deal, but it’s kind of an eerie resemblance.”

Jacob hopes for a possible return to action in basketball mid-season and targets a full recovery by baseball season in the spring.

“I can look back at my experience and say I put it all out there, gave it my all, and did everything I could while I could,” Wolken said. “I hope some little kid somewhere sees that and they grow up and play hard and just take the game to heart because it can be over before you know it.”