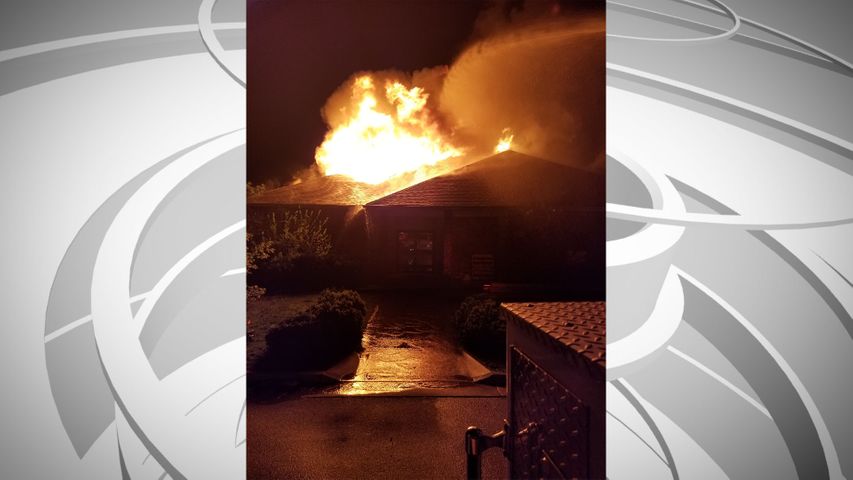 TANGLEWOOD - The Callaway County Ambulance District had plans to move into a new building by the end of the year, but that is unlikely now. The building they were constructing burst into flames early Thursday morning.

Mary Ann Echelmeier lives in a retirement community right next to the building. She said she woke up to officers pounding on her door while evacuating her street.

"We all grabbed blankets and ran to the other side of the street. They said there was something combustible in the building and they wanted us as far away as we could get," Echelmeier said.

Fire officials said when they first arrived on scene they could only see smoke, but fire soon began to burst out of the roof of the unfinished building.

Russell Sing, who is the training officer for the Fulton Fire Department, was leading the fire defense. He said in addition to being concerned about what could be inside the building, they were also concerned about the roof collapsing.

"Once the fire came through the roof we realized the fire was progressing quickly," Sing said. "That's when we evacuated firefighters due to possible roof collapse."

The CCAD director Charles Anderson said the building they currently use is too small. He said the goal was to have the new building completed by this November. The district won't be able to meet that deadline now and he is not sure when the new completion date will be.

According to the Fulton Fire Department, the fire caused nearly $500,000 worth of damage.

Anderson said the building was insured and the damages will not cost the ambulance district any money.

There were no injuries and EMS services are not affected.