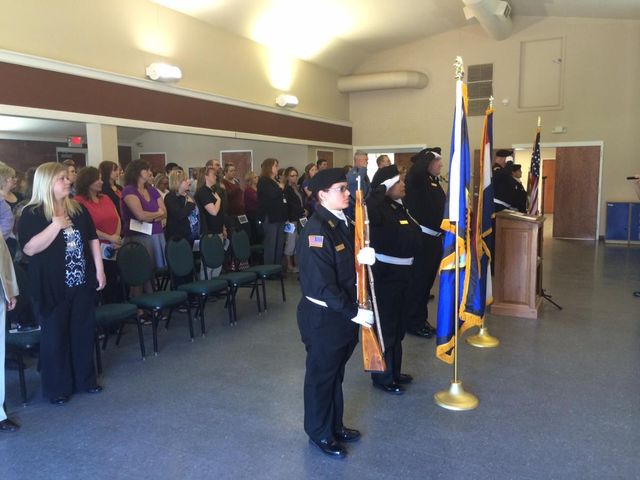 FULTON - Callaway County honored its crime victims at a ceremony in Fulton on Friday afternoon.

Around 70 mid-Missourians gathered at the John C. Harris Community Center to share their stories and commemorate crime victims and those who advocate on their behalf.

This year's theme, called "30 Years: Restoring the Balance of Justice", honors the achievements the department has made since the passage of the Victims of Crime Act (VOCA) in 1984. One of the main milestones of the act was establishing the Crime Victims Fund, which offers support for victim services and compensation funded through fines and penalties paid by criminal offenders in the federal justice system.

Last year, there were nine claims submitted for financial compensation in Callaway County, of which four were awarded.

Callaway County Prosecuting Attorney Christopher Wilson said it is important for people to realize what it means to be a victim.

"They have rights. I think when we look at the criminal justice system, so much of it is devoted to the defendants' rights, that is good for us to take a step back and realize that there is another person who are also affected by crime in our community and there are also victims," Wilson said.

He called for the community to be more supportive, especially employers who have to work with people who have been affected.

Missouri Highway Patrol Captain Larry Plunkett Jr. shared his experience dealing with crimes, such as drunk driving and others. He got emotional when he recalled the story of a young woman who died in a motorcycle crash.

Plunkett said events, like Friday's ceremony, are important to bring community members together to stand up for victims.

"Whenever they see something of this nature happen, they reach out, they offer their support, they volunteer with some of these advocacy groups in their communities," Plunkett said.

As part of the same initiative, Gov. Jay Nixon addressed a group of victim's rights advocates at a Capitol ceremony Thursday. Nixon stressed the importance of helping crime victims who are in need of assistance, to ease the challenges they may have.

Secretary of State Jason Kander highlighted his Safe at Home program, which provides a substitute mailing address for crime victims in order to protect their confidentiality.