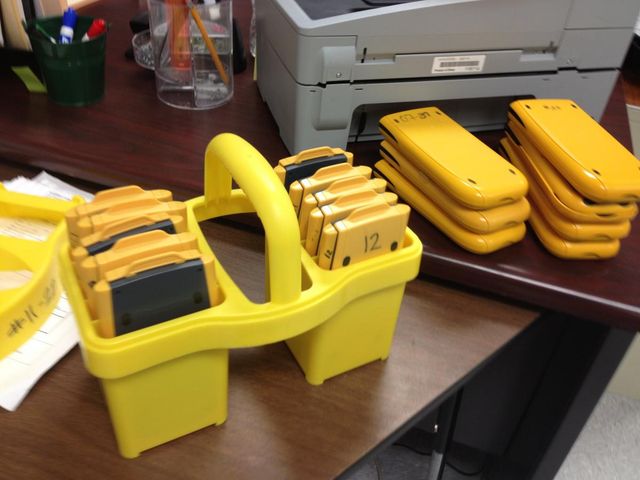 CALLAWAY COUNTY- A $25,000 grant to Fulton High School for computer equipment has split the community, thanks to the source of the money--Monsanto, the St. Louis-based agriculture chemical company. The money was part of Monsanto's America's Farmers Grow Rural Education program.

Fulton-area farmer Darren Horstmeier has a daughter at Fulton High School and nominated the school for the grant. FHS Math teacher Cindy Cravens wrote the application. She said this money will really help her students.

"I hope that some of our students that are low achieving will really get interested and start liking math. I hope they don't have to struggle as much," Cravens said.

The students currently use smart boards, stationary computer labs that are shared by all classes and in class graphing calculators.

Cravens said the money will be used to buy her students 30 Samsung Chromebooks that will allow them to have personal computers and fix the problem of having limited Internet access in class.

"We were really struggling to get to try to get to the level of other schools that have personal computers for all of their students." said Cravens.

Horstmeier has a daughter in Cravens' class and said being able to help gave him chills. "This place just needs something to pick them up with the sports programs and things going on this is just kind of icing on the cake." said Horstmeier.

Horstmeier uses Monsanto products and said that it was a necessity to use Monsanto's funds. "Monsanto is in so many things that we do its hard not to be a part of them," said Horstmeier. "They have things that we need to make our life thrive."

But some farmers in the area did not want the school to take the money from Monsanto.

Organic Farmer Ken Brickui has owned his farm for seven years. He refuses to use Monsanto products. "I know they spend a lot of money trying to influence people, so you might say this is just another way of influencing people, 'Oh, nice Monsanto.' Eventually, if they control all the food, they control all of the people, and that is what we are getting to."

Brickui said he has witnessed Monsanto drive a lot of local farmers out of business.

"If Monsanto wants to come check my field, they have right to come in and check my barn and farm equipment. If they find one GMO [genetically modified organism] they can come and seize all my equipment, sue me for patent infringement and they have drove a lot of farmers out of business."

Doug Mirtens, a district account manager for Monsanto, said that awards like this grant are just one of the few ways Monsanto helps communities and keeps farmers in business. "I think it's a great opportunity for us to give back to our customers and give back to the communities where they live and they work and they derive their living from," said Mirtens.

According to Mirtens, Monsanto has the challenge of finding ways to feed the growing population. He said the challenge of growing more food on fewer acres is the universal problem agriculture is facing.

Navy veteran and "March Against Monsanto" event organizer Kasey Henderson adamantly disagrees with Mirtens. "I got really sick with endometriosis, GMO seeds like the ones from Monsanto distributes really affects people like me."

Henderson also against FHS taking the money from Monsanto.

"It's blood money. I understand we need the money. We want them to know that their money is no longer good here because they might give you $25,000 to your school for your personal computers, however that's not exactly a necessity that shows how our community has grown dependent on technology."

Fulton High School accepted the money October 11 and moved to buy the equipment.

[Editor's note: Once this story posted, Christy Toedebusch, who works as product communications lead for Monsanto's public affairs department, wrote with the company's response to farmer Ken Brickui's contention he could be sued by the company.  The written response states: "Monsanto has never sued a farmer when trace amounts of our patented seeds or traits were present in the farmer's field as an accident or as a result of inadvertent means. The company has made a long-standing public commitment not to exercise its patent rights in those circumstances."]