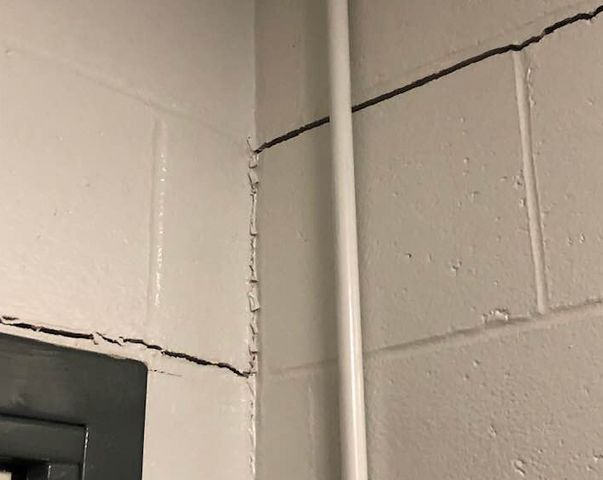 FULTON – Callaway County is actively searching for a new jail site as its 30-year-old jail continues to deteriorate.

A new justice center would cost nearly $30 million and would include offices, court rooms and a jail. One of the county’s biggest concerns is the jail’s current condition.

Callaway County Western District Commissioner Roger Fischer said some parts of the jail have been sinking or cracking for decades. Fischer said the growing issues have even become safety concerns.

“If you happen to have an emergency and you need to get to people or get people out of a room, you can’t have a door that’s jammed,” he said.

In addition to the safety concerns of jamming doors, Fischer said overcrowding of the jail has become an issue as well.

“We finally got to a point where the jail practically stays full seven days a week for 365 days a year,” Fischer said. “We have to look at, do we add on to the jail or do we build a new jail?”

One possible site for the new jail is Rice Hall, which is an unused part of the Missouri School for the Deaf.

“Rice Hall might be a possible option because it has a facility that could be utilized and has thousands of square feet that might be able to be utilized under the right conditions," Fischer said.

Using Rice Hall as the jail’s new location would save Callaway County between $5-8 million.

But some people living in the area are concerned about the site itself and its proximity to several schools, including the Missouri School for the Deaf.

Kiera Lee Roberts is a current employee and former alum of the Missouri School for the Deaf. She graduated in 2007.

“It’s been a while and there’s lots of good memories with this place,” Roberts said.

Roberts said she and several other alumni were upset when they found out that Rice Hall was a possible site for the jail.

“It’s heartbreaking and disappointing,” she said.

Her biggest concern is how close the jail would be to her school and other nearby schools and parks.

“We have kids walking from the school to the park and back. We would rather have Rice Hall be restored as something else for a better place or a better community,” Roberts said.

Although Roberts and other community members are concerned about Rice Hall becoming a jail, Commissioner Fischer said the county is not set on using the site for the jail.

“There is nothing that says it has to be on the same site. The jail itself could be on a different site,” Fischer said.

Fischer said he believes building the jail and the rest of the justice center on the same site would be the most affordable option, but he said there is still room for discussion.