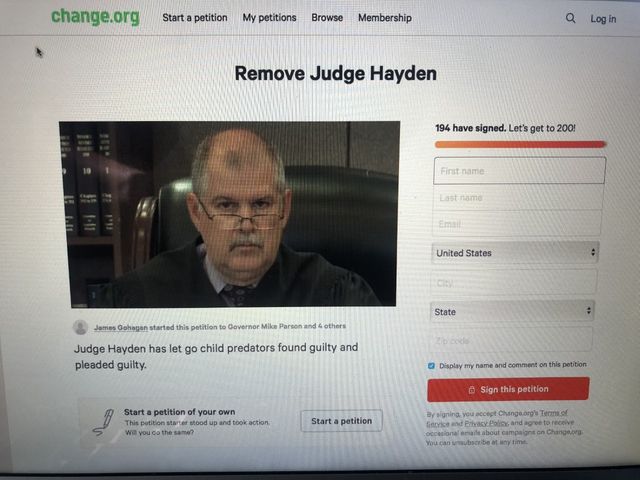 CAMDENTON - A Camdenton man has launched an online petition to remove Circuit Judge Kenneth Hayden from the bench.

According to a "press release on the Camden County Missouri Prosecuting Attorney's Facebook page, Judge Kenneth Hayden sentenced Robbie Nalley to 22 years in prison for child molestation and statutory sodomy charges but suspended the sentences and placed Nalley on probation.

James Gohagan posted the petition to his Facebook page stating,

"Please share. This judge is letting literally monsters back into our community. This is horrible for the victims that the one that molested them gets let go and they get left behind."

"Probation is way different than prison time, which is what I feel a lot of us believe this guy deserves," he said.

One community member, Rusty Scott said the issue is finally getting the attention it deserves.

"The judge doesn't want to impose the strongest sentence that he can," Scott said. "He's cutting him a break, like they stole a candy bar or something."

Scott said he believes this kind of decision made in the courts is putting the community and the children more at risk.

"They're ruining people's lives left and right, getting out on probation and doing it again," he said. "But nobody wants to speak up against it."

Scott said he, Gohagen and other community members are working on getting the word out, starting with this petition.

The petition has been signed by more than 200 people online.

KOMU 8 News reach out to Judge Hayden's office, but he had no comment at this time.