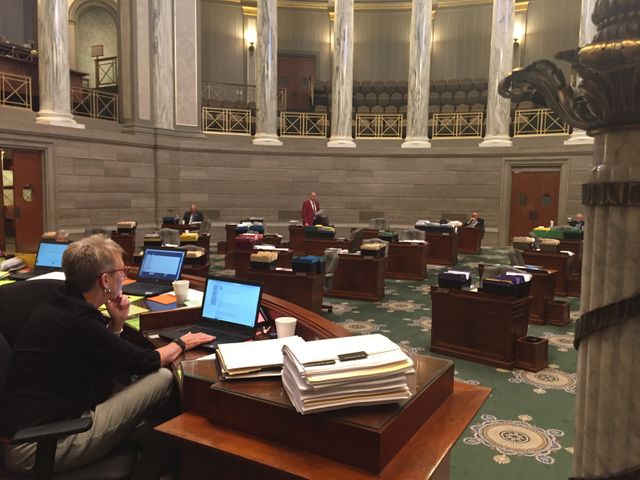 JEFFERSON CITY - The longest filibuster of this legislative session came to an end Tuesday night.

After a group of six members of the conservative caucus stalled for more than 27 hours, the Senate passed a bill that could bring more jobs to Missourians.

One is a "Fast Track" program, a scholarship that would allow Missourians to receive training for better jobs in manufacturing, computer science and other fields.

The second is a "deal-closing fund," which could be used by Parson's administration to help job growth without legislative approval.

The delay in debate was caused by six senators who make up the conservative caucus. They took 2-4 hour shifts to filibuster on the Senate floor.

Sen. Cindy O'Laughlin, R-Shelbina, said she wants a bill that will serve all of Missouri, not one particular company.

"It isn't our role to pick a particular company out and say, 'This one is worthy of it, so let’s go ahead and do it for them.' We're not doing it for everyone else," she said.

However, she eventually agreed to end the filibuster because she didn’t want it to take up time for debating other legislation.

“If we wanted to, we could go virtually forever,” O’Laughlin said. “But we don’t want to do that. We realize it creates a stoppage of work, and we know it’s our last week.”

“Do we move forward to protect innocent human life as we pledged to do when we ran for office, or do we oppose some misguided economic policies?” Onder said. “We chose to do the former.”

O'Laughlin said the conservative caucus is OK with incentivizing GM to expand, but not with the other sections.

"If it’s just the tax credit, fine," she said. "But then you add in Fast Track, which is an adult scholarship program; we’re not convinced that’s necessary. I think the worst thing is the deal-closing fund, which is basically just a big pot of money.”

Sen. Caleb Rowden, R-Columbia, voted in favor of S.B. 68. He said one misconception is that the GM incentive does not have anything to do with the workforce development.

The Senate approved the bill with a vote of 25 to 8.

Debate on abortion is expected to begin as early as Wednesday morning.