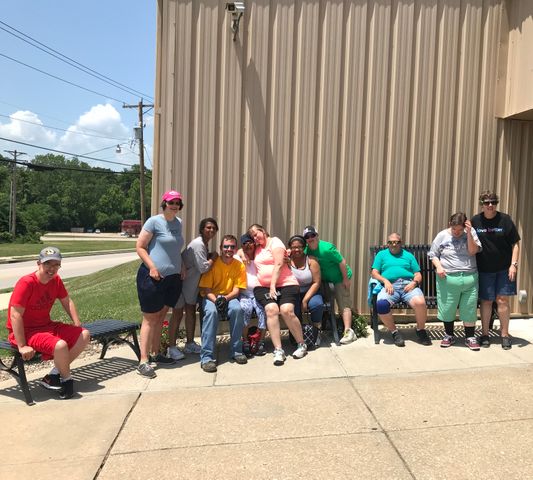 JEFFERSON CITY - Capitol Projects is a workshop in Jefferson City that has been providing employment for people with disabilities since 1968.

"It's a happy place to be," Capitol Projects Executive Director Tami Bock said. "Our employees are what make it."

She said it all started with a small group of parents.

"It was just a nucleus of parents that knew each other that had children that needed something to do during the day," Bock said.

She said it didn't take long before people found out a place like this existed.

"I think they had 16 employees at the time," she said. "When word got out that there was a place for people to come and be productive, it didn't take long for the numbers to increase."

Carrie Rost has been working at Capitol Projects since 1992. She said her favorite job is packaging snap caps.

"I just do a lot of things," Rost said. "Right now, we're doing snap caps. We put 10 in a carton and put a cardboard in it and seal it up and stuff like that. It's really fun."

Rost said she loves her job no matter what work she is assigned to do.

"We get to do a lot of fun stuff, that I like. Sometimes I don't like it, but I still do it anyway."

Bock said Capitol Projects has evolved over the last 50 years.

Originally, the workshop was in an old, two-story building that wasn't suitable for people with disabilities.

"In 1973, they had a campaign to raise money to build the building where we are now," Bock said. "So, just physically, we've seen it change because of a nicer building that we are in."

She said the work hasn't changed too much for the employees. She said it is still very hands-on.

Bock said the work comes from sub-contracting with businesses in the community, including Scholastic.

She said the workshop is looking forward to Scholastic sending more books, which means it can buy more equipment and hire more employees.

Bock said the celebration is a chance for the community to come see what the employees actually do.

"I could talk all day about what we do," she said. "But until you see what we do, it really doesn't have the meaning."

The celebration will include a ribbon cutting ceremony, a tour of the workshop, and building dedication.

The workshop is dedicating the building to former director Kenneth Wagner, who worked there for almost 40 years.

The workshop will be open to the public Tuesday from 9-11 a.m.