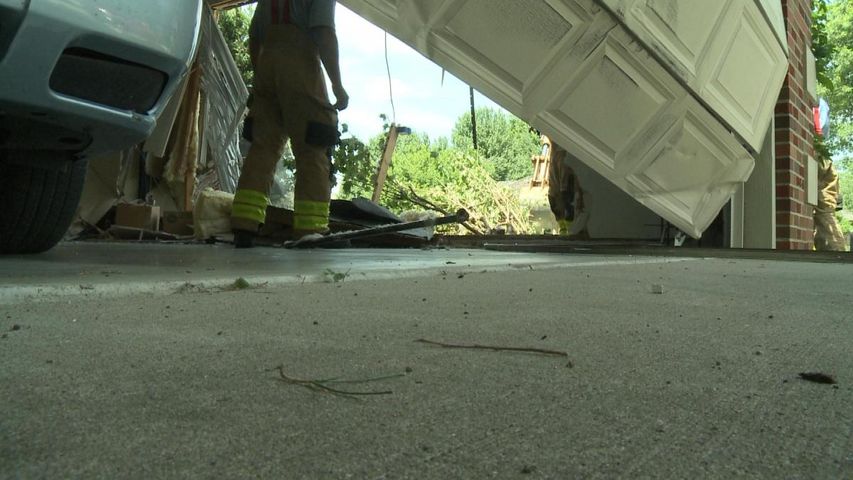 COLUMBIA - A car crashed through the garage of a duplex on Vintage Dr. Tuesday afternoon, and continued through a brick wall into the duplex's yard.

Columbia Fire Department Battalion Chief Brad Fraizer said at 11:24 a.m., the department received a call from a neighbor about a car crashing through a building. Fraizer said the car failed to turn around a curve at the corner of Torrey Pines and Vintage Drive. Units were on the scene shortly after. They said the car also knocked down a gas meter in the yard. Ameren arrived shortly after to shut off the gas and power, in fear of a potential gas leak.

Fraizer said three people live at the duplex on 1102 Vintage Dr., but none were injured.  One resident, an elderly woman, requested oxygen, but had no wounds.  The driver, Arthur Evans, was helped out of his vehicle by paramedics and taken to University of Missouri Hospital.

"Your concern is always for life safety, initially," Fraizer said, "and making sure that...the gas meter is taken care of, and the driver, so there's a lot of things going on at once.  But that's what we train for."

Linda Albery was moving into the house across the street when she heard the car crash through the duplex. When she saw what happened, she ran to the car to help the driver.

"I didn't really give it a second thought," Albery said.  "I knew somebody had to be hurt. I just did.  I think that's just your instinct to do something like that."

Albery said the only physical wounds she saw on the driver were cuts from glass.  She said the driver was conscious, but only responded to a couple of her questions.

University of Missouri Hospital said it discharged Evans at 4:30 p.m.