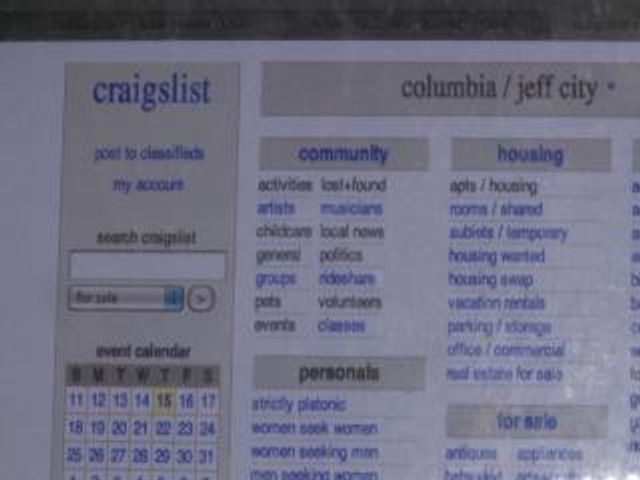 COLUMBIA - A local woman said she was nearly scammed out of $2,300 on Craigslist.

"They almost got me," April Brashier said.

Brashier was shopping for a new car on the Craigslist website. She said she found the right one, but it seemed to good to be true.

"Everything looked good. The price, the miles, but something was still not right," Brashier said.

The supposed seller went to great lengths to set up the scam, she said. The person used a fake eBay account and provided pictures of a car, she said.

The more contact she had with the seller, she said, the more it became clear she was being deceived. After doing some research, Brashier said, she realized many things stated in the emails were not true.

The Boone County Sheriff's Cyber Crimes Task Force said it gets calls about similar scams a few times a week. It said it could not act on all of them.

"We seldom work those cases because we do not have the resources to do everything," said Andy Anderson, Detective on the Cyber Crimes Task Force.

Anderson does offer advice to avoid being tricked. He said people should be skeptical when making online purchases. If it seems to good to be true, he said, it probably is.

Craigslist also offers advice for avoiding scam. The website says dealing with people you can meet face-to-face can significantly cut down on the chances of being ripped-off.

Once Brashier realized she was getting scammed, she said, she tried to investigate, but the person who posted the add will not return her emails.

Brashier said she just hopes they don't get any one else.