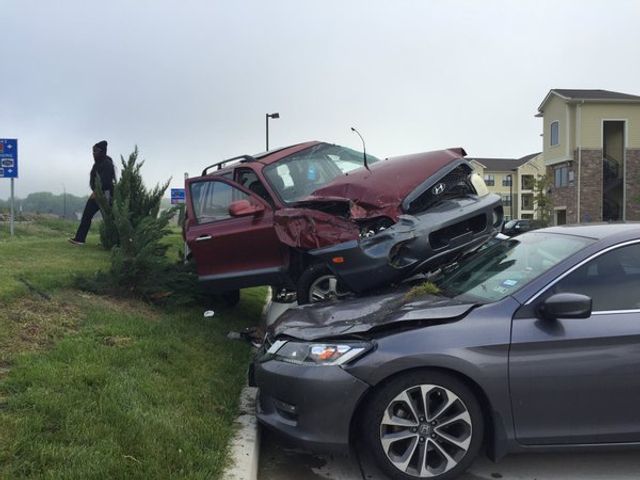 COLUMBIA – A driver was not hurt Tuesday after the car he was driving lost control and landed on top of two parked cars.

Police said the driver is David Dey, 30, from Columbia Missouri. Officers took Dey into custody, saying he had an outstanding warrant.

The Columbia Police Department said officers responded to the Domain apartment complex at the corner of Stadium Boulevard and U.S. 63 just before 8 a.m. Tuesday.

The Columbia Fire Department said a car had been coming off the ramp when the driver lost control and rolled over onto two parked cars in the Domain parking lot.

The fire department said Dey was out of the car by the time crews got to the scene. Police officers said Dey was wearing a seat belt and wasn't hurt.

Mohammed Alkhaldi, who owns one of the damaged cars, said he was thankful nobody got hurt.

Dey was arrested on an outstanding warrant for driving while intoxicated misdemeanor and four counts of property damage in the first degree. His bond was set at $18,500.

The police department said the car was towed from the scene. There was no damage estimate for the cars.

[Editor's note: This story has been updated to include more information.]