Cardinals Lose Game One of Divisional Round to Nationals 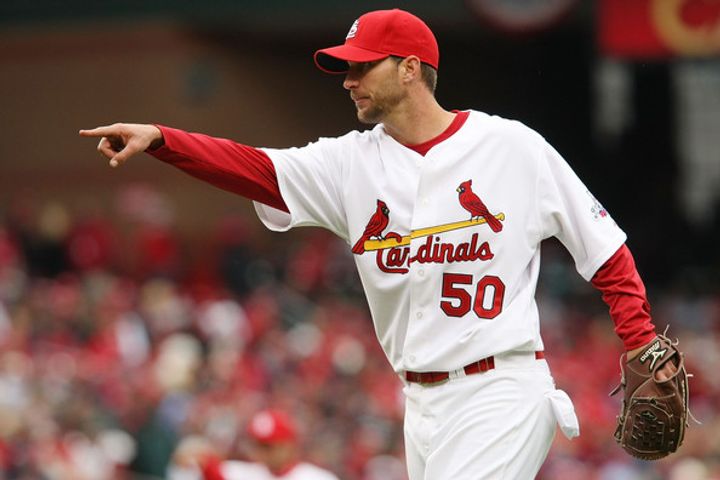 ST. LOUIS -- Rookies in the postseason, the Washington Nationals played like poised veterans.

They have just four players with postseason experience on the roster. But they have the lead.

"Not many people have probably watched too many Nationals games, but we have a great starting rotation and a great bullpen," said Ian Desmond, who singled for his third hit in the go-ahead rally. "They keep us in the ballgame and some timely hits from this kid, and the rest of the guys coming off the bench, that's really been the formula."

The Nationals, who had never come close to making the playoffs since moving from Montreal for the 2005 season, overcame a wild start by 21-game winner Gio Gonzalez. They limited the Cardinals to just three hits.

"All the credit in the world goes to the bullpen," Gonzalez said. "I've been saying it all year. The reason why we've been so successful is these guys come in and shut it down."

Rookie reliever Ryan Mattheus needed just two pitches to bail out the Nationals in the seventh with St. Louis ahead 2-1. Moore, another rookie, put them ahead soon after that, Tyler Clippard worked around an error in the eighth and Drew Storen saved it with a 1-2-3 ninth.

The NL East champion Nationals led the majors with 98 wins this season, and brought postseason baseball to Washington for the first time since 1933. The Nats go for a 2-0 series lead Monday when Jordan Zimmermann opposes Jaime Garcia.

"This team is not hanging our heads," St. Louis starter Adam Wainwright said. "We can come back and win this easily."

The Cardinals made it to the best-of-five division series by beating Atlanta in the wild-card matchup Friday. But St. Louis wasted a 10-strikeout gem by Wainwright, failing to capitalize enough on Gonzalez's career high-tying seven walks and frustrating its towel-waving fans.

Mattheus diffused a bases-loaded, none-out threat in the seventh, getting cleanup man Allen Craig to ground into a forceout at the plate and then inducing a double-play grounder from Yadier Molina. Craig led the National League with a .400 average with runners in scoring position and Molina batted .321 in those situations.

"It was a big moment," Mattheus said. "It gave us life. The guys said, 'Hey, we can win this ballgame.'"

A standing room crowd of 47,078, among the largest at 7-year-old Busch Stadium, bundled up for a game that began in 54-degree chill and featured kaleidoscope late-afternoon shadows that bedeviled hitters for several innings.

"It was pretty bad, but you have to make adjustments and that's what I did," Molina said. "But what are you going to do? Quit? No."

Third-place hitter Matt Holliday chimed in his complaints about facing Gonzalez: "He's hard to hit when you can see well and even harder when you can't."

Rookie shortstop Pete Kozma misplayed Michael Morse's grounder for an error to open the eighth and set up the Nationals' go-ahead rally. Desmond followed with a single off Mitchell Boggs, putting runners at the corners.

Danny Espinosa sacrificed, leaving runners at second and third, and Kurt Suzuki struck out. In a series of moves, the Nationals sent up Chad Tracy to pinch hit, the Cardinals switched to lefty Marc Rzepczynski and Washington subbed in Moore, who had two of their three pinch homers this season.

Rzepczynski pretty much hit his location but Moore poked it to right field and both runners scored easily.

"I was just trying to calm myself down and try to make some things happen and not strike out up there," Moore said. "I wanted to at least put something into play."

Nationals manager Davey Johnson doesn't usually play small ball but opted for the bunt because Espinosa had been having a tough game.

"I'm kind of from the Earl Weaver school, just keep swinging," Johnson said. "Don't like to steal that much, either. I don't like to give up outs."

Wainwright became the first Cardinals pitcher to reach double digits in strikeouts since Bob Gibson also fanned 10 to beat the Tigers in Game 4 of the 1968 World Series.
Wainwright was a 14-game winner coming off reconstructive elbow surgery that sidelined him all of 2011, with 10 of the wins coming at home. He's been a postseason ace with a microscopic 0.77 ERA and 32 strikeouts in 23 1/3 innings.

He fanned Bryce Harper and Ryan Zimmerman twice each and seventh-place hitter Espinosa all three times.

"My fastball command kind of left me at the end," Wainwright said. "For the most part I felt like I went out there and competed my tail off. Gave it everything I had."

Gonzalez allowed just one hit in five innings, on David Freese's full-count bouncer between third and short to start the fourth. But he had trouble finding catcher Suzuki's glove and keeping warm.

"I kept blowing in my hand, kept looking to do whatever I could to throw a strike," Gonzalez said.

The second inning was Gonzalez's shakiest when he allowed the Cardinals to score twice and take the lead without a hit. Gonzalez walked four of the first five hitters, putting St. Louis in position to score one run on a wild pitch and a second on Jon Jay's bases-loaded sacrifice fly.

"The whole time I was just saying minimize the damage because things were spinning out of control. I just wanted to match everything Wainwright did. I was trying to keep up with him."

Nationals right fielder Jayson Werth robbed Daniel Descalso of a two-run homer off with a leaping catch to keep it at 2-1 in the sixth. Descalso had a fielding gem of his own in the seventh, ranging far to his left to glove Harper's grounder and then throwing him out by a few steps.