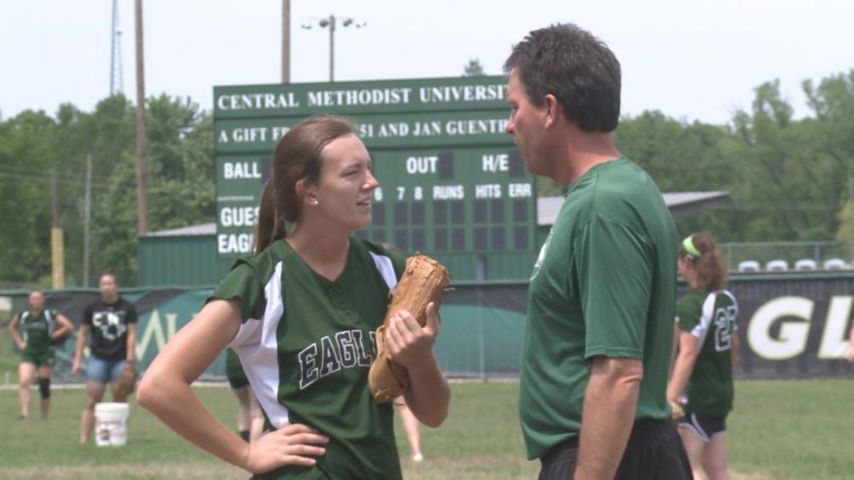 FAYETTE - Family is a big part of the Central Methodist University softball team. Three generations of the Reardon family are part of the program. Pat, the father, has been the head coach for the last 24 years. Gene, the grandpa, has been an assistant for the last 10 years, and Addy, the daughter, joined the team this season and starts in the outfield as a freshman.

A history of success

“Last year here [at Cox Softball Complex], the final out and kind of everybody out there, and just hugging my dad, you know, sharing that stuff with him has been great,” Pat said.

Gene also recalled several accomplishments he and his son have achieved.

“Seeing him and him being excited, the first time we really got to go to the finals at the World Series, winning the first conference championship, I mean all of that stuff was just nice to see being accomplished together,” Gene said.

“Those will be things that I think if he ever does give it up, or if I ever give it up, we can sit back and enjoy,” Pat said.

Addy, then a senior in high school, had to celebrate the conference championship last season from the stands.

“It was really cool watching, at that point in time I had committed, so I was hoping next year I could be out there too,” she said.

“Having won five in a row it was kind of like, my biggest fear was her coming here and not being able to do it in the time she was here,” Pat said.

Addy had a big freshman season and was one of eight players on the team named All-Conference, just one of two freshman on the team to earn that honor. The conference honored Pat as the Heart of America Athletic Conference Coach of the Year.

The team went on to win its sixth consecutive conference championship this season. This time, all three Reardon’s were on the field celebrating.

“And when we did win it I just gave her a big hug, and I said, 'We got a ring,' so all three of us will have one for the rest of our lives,” Pat said.

“And of course I teared up after that because that’s a cool thing for a dad and daughter to have,” Addy said. “I think just playing for my dad is a great opportunity and not a lot of kids get that, so I’m happy that I got that opportunity."