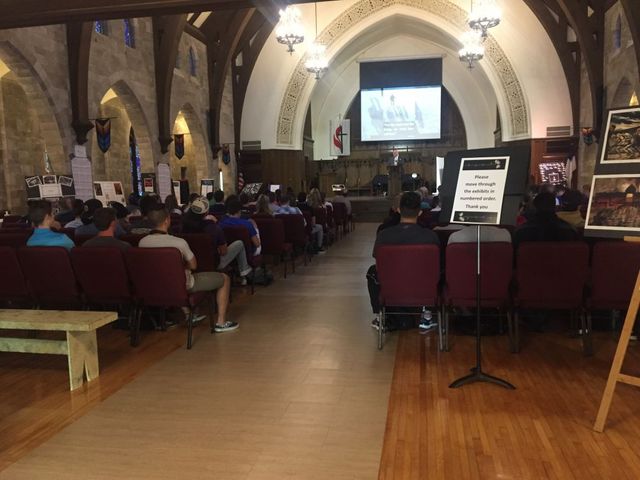 The purpose of the event was to educate students and the community about the Holocaust and remember those who died. Organizer Catherine Shanahan said the ceremony is timely because of recent anti-Semitism acts around the world.

“We believe there has to be education. There are all sorts of atrocities going on around the world and we need to learn the past in order to make a better future,” Shanahan said.

The event is part of a nationwide effort to honor those affected by the Holocaust and Nazi persecution during World War II. The Holocaust was the state-sponsored, systematic persecution and annihilation of millions of European Jews and other groups by Nazi Germany and its collaborators between 1933 and 1945.

“With the Holocaust Remembrance Days we want our students to feel deeply. We want them to have an understanding of just what man kind has tragically capable of…We think it is important that we honor history and we continue to remember these kinds of atrocities,” CMU President Roger Drake said.

The program featured 20 exhibits about the history of the Nazi regime, stories of Holocaust survivors and the history of anti-Semitism in Missouri. There were also performances from CMU Chorale and a Kansas City area dance company Dramatic Truth.

Guest speakers included Mike Schmid, Director of the March of Remembrance-Kansas City, and Kerstin Haack, whose grandfather was a Nazi.

The exhibits at CMU will be moving to the Overland Park Convention Center for the March of Remembrance-Kansas City on Sunday, May 7, 2017.