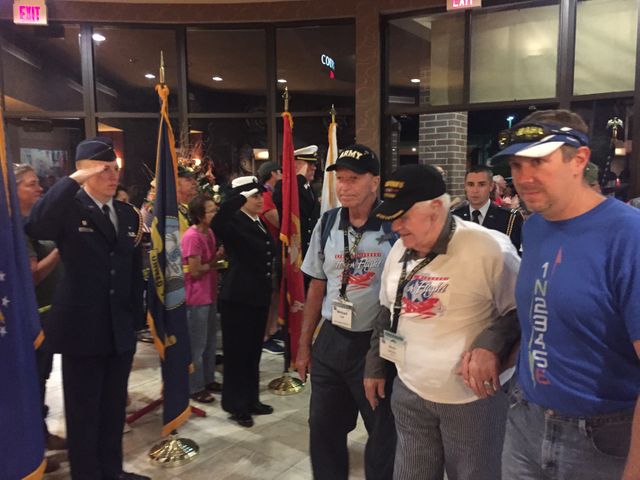 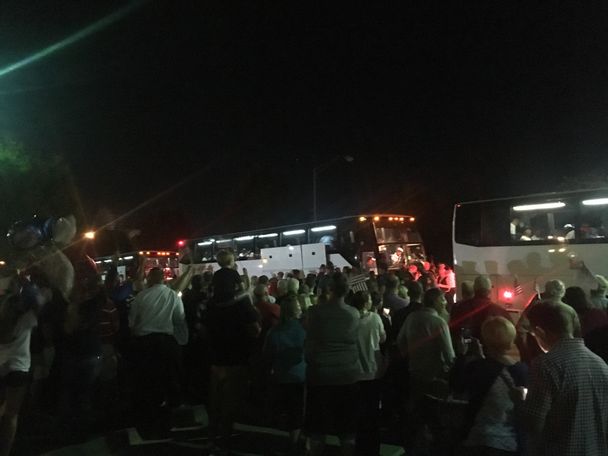 Busses filled with veterans return to Columbia after traveling to Washington D.C. and back.

People had gathered outside the Courtyard Marriott off highway 63, hours before the veterans returned home just to catch a glimpse of their heroes. It was shortly after 10 p.m. when the first tour bus made it’s way back from the St. Louis airport.

Veterans were accompanied by dozens of motorcycles in Kingdom City as Missouri State Highway Patrol officers shut down the highway and escorted them, uninterrupted until they returned home safely.

The Central Missouri Honor Flight is a non-profit organization created with the sole purpose to honor America’s veterans. Transporting former service members to Washington D.C. several times a year to see the memorials dedicated to their sacrifice and time serving their country.

CMHF knows that time with some of our veterans is running out. According to their website, nearly 20 World War Two veterans in Missouri are lost every day, along with veterans from other wars who are terminally ill.

Bob Dreier served on a Landing Ship Tank in the Philippines during World War Two from 1941 to 1946. He said that without CMHF, he would have never been to Washington.

“I’m an old man now,” Drier said. “I had never been to Washington. I would have surely died without ever seeing the monuments. I had a swell day and I am amazed to see how many people came out to support us here tonight. It is humbling.”

Board member and flight 49 commissioner Jan Bell said the honor flight homecoming is the most effective way civilians can show their local veterans they truly care.

“Many of these men here never got a homecoming,” Bell said. “Especially after the Vietnam War, these men went and fought for their country some didn’t even have a choice. They sacrificed a lot and we are here tonight to let them all know that we are truly grateful.”

The Courtyard Marriott will host a welcome home party for flight 49 October 22nd from 2 p.m. to 4 in the conference center.