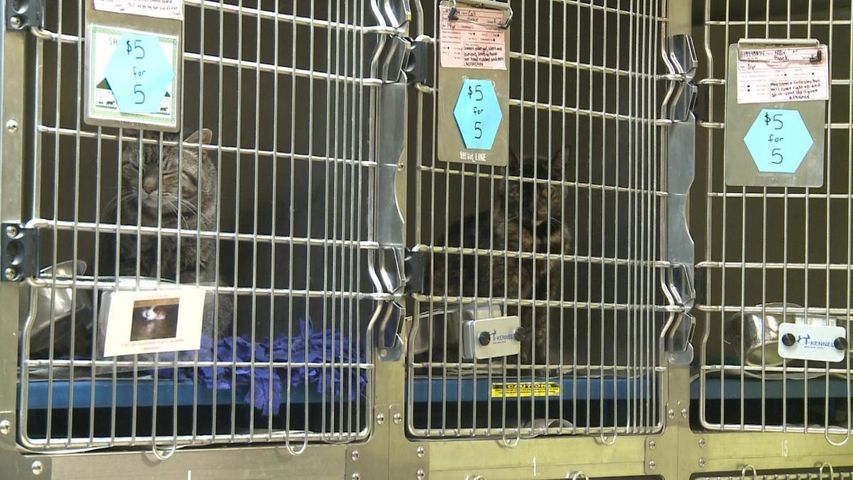 COLUMBIA - The Central Missouri Humane Society is hosting a 5 for 5 adoption deal Wednesday, May 29th through June 1st. For five days, certain dogs and cats will cost only five dollars and the deal lasts for five days. The Humane Society sees an increase in animal drop-offs during the spring and summer seasons. Danielle Burlis has worked at the Humane Society for four years, she is a volunteer coordinator. Burlis said that right now, the Humane Society is "really full" and is hoping to get more animals adopted.

To encourage adoption, the Humane Society created the 5 for 5 deal. This deal is for mainly older animals who have been at the shelter for a long period of time. The adoption fee includes the animal being spade or neutered. The fee also includes a microchip and age appropriate vaccinations, as well as a free veterinarian visit.

According to the Central Missouri Humane Society's website, it took in 339 animals during the month of April. In February, the facility took in 201 animals.

"It's definitely kitten and puppy season. When the weather warms up we get a lot of pregnant moms, both cats and dogs as well as litters of puppies and kittens. It's just the time of year that everybody is out and reproducing," Burlis said. "So we definitely see an influx of younger cats and dogs as well as just animals in general. Our summer and spring period, that's kind of our peak of our intakes so we're definitely seeing a lot more youngsters coming through our doors right now."

The Humane Society takes in an average of 5,000 animals a year. It is an open door shelter, which means it will never turn away an animal.

The shelter hopes the 5 for 5 advertisement will get more people in the doors to see the animals and increase the amount of adoptions. The 5 for 5 deal began May 28th and continues until Saturday, June 1st. The Humane Society is open until 7pm on Wednesday.  The hours are from 12pm - 5pm on Thursday, Friday and Saturday.