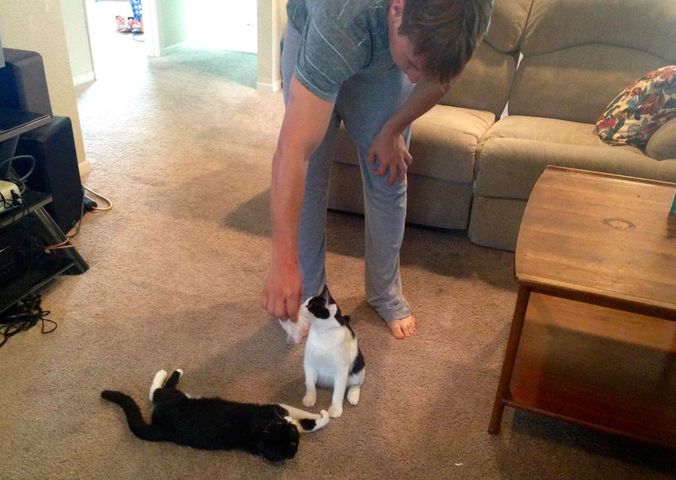 COLUMBIA -  Storms often lead to some pets getting loose when they run in fear of thunder and lightning.

Michelle Casey, assistant director at the Central Missouri Humane Society (CMHS), said the shelter keeps a close look on the amount of space available in the building to prepare for displaced animals in the wake of this week's storms.

"We're always trying to be prepared for any disaster that can come up," Casey said. "When we're getting tight on space and things like that and we are thinking there might be more animals coming in, then that's when we utilize those foster homes."

Casey said the shelter has not had a lot of displaced animals dropped off.

"Luckily we haven't seen a lot of dogs or cats that have been displaced," Casey said. "But you always have to prepare for it, especially because it has been kind of tornadic out there."

"The minute we pulled up and we started walking on the trail, these two lovely cats came out and greeted us," Young said.

Young said he took the two kittens, Zinc and Amelia, to the CMHS for an evaluation and to have them rescued. However, Young said he was sent home with the kittens and received a cage and some food while the CMHS dealt with the storm.

Casey said, even though the CMHS might not be currently full, summer time is kitten breeding season, so the shelter may ask people who bring in animals to take on a foster care role.

Young said he plans to take the kittens back to the CMHS later this week.

Casey said it prepares for lost animals to be brought in by keeping track of vacant kennels and keeping a certain number available just in case. She said the CMHS currently has about 120 animals right now, which is average, and can hold up to 200 animals.