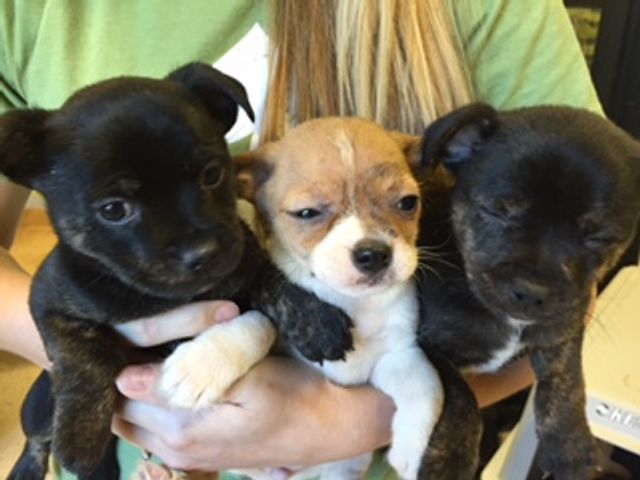 CMHS is currently taking care of 12 chihuahua puppies and 19 adults, as well as two cats.

Foster Care Coordinator Brooke Dickerson said CMHS is happy to help out these animals in their time of need.

"It did burn the house down, luckily a lot of the dogs were able to get out of the house and reunite with the owners. They tried to keep the dogs in their car for a few days, but after a few days they brought them to us."

Animal foster mom Caitlin Christopher has been fostering for 5 months and was surprised when she received an "emergency" email.

"I got an emergency email on Monday saying there were 31 chihuahuas dropped off over the weekend, and they needed fosters as soon as possible," Christopher said. "I told them that I wanted some of the older ones because I wasn't ready for four-week ones, so I got two eight-week-old chihuahuas."

A couple of the dogs have already been adopted since their arrival last weekend, but not all of them were ready.

Dickerson said some of the dogs have been in a home where they were living with 20 other dogs their entire life. CHMS wants to make sure the dogs can thrive in a regular home environment.

The dogs have some minor health issues.

"For the most part, it seems pretty fair considering the conditions. Of course, when they came in they did smell like smoke pretty strongly because of the fire. So far, we've been able to determine that the majority of them are pretty healthy," Dickerson said.

Before any adoptions, CMHS does a behavioral and veterinarian evaluation to make sure the dogs are safe to take home.

Christopher said she acted quickly because she wanted to help eliminate the number of dogs CHMS might have to put down.

"The humane society is not a non-kill shelter, so the more fosters they have, the less they would ever have to put down. In this situation they needed fosters for these little puppies, because its hard for puppies to be in the shelter. So, I figured I had the space and my dog could use somebody to play with."

Christopher named the puppies Tom and Jerry. She said they have a lot of energy and are very loving.

People interested in adopting or fostering one ore more of the dogs should contact Central Missouri Humane Society.