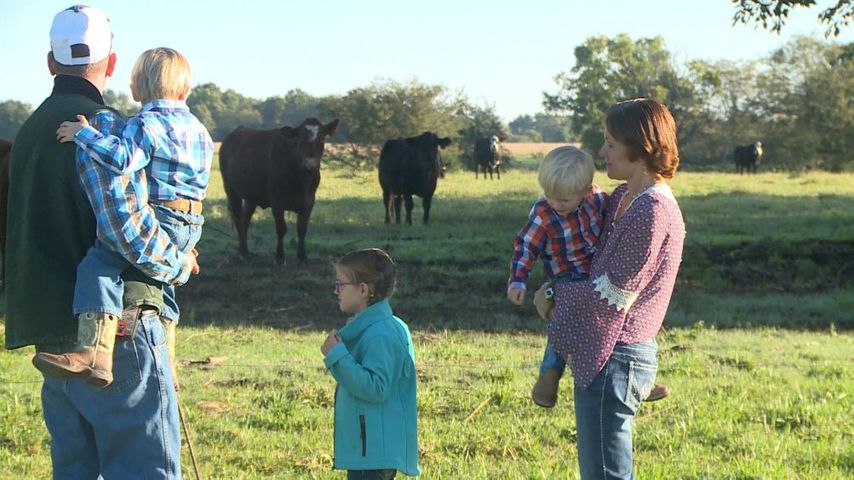 The Stowers, Greg, Garon, Breelle, Gavin and Kara (left to right), are preparing to host the Luke Bryan Farm Tour at their farm in Centralia on Friday.

CENTRALIA - It started with a phone call, from another farmer to Greg and Kara Stowers, asking if they could find someone to host one of the biggest names in country music.

Now, they are getting ready for more than 15,000 people to gather on their farm for the Luke Bryan Farm Tour this Friday.

"Initially, to be honest about it, we were kind of set back and didn't really believe it," Greg Stowers said. "It's not a normal phone call you get that an Entertainer of the Year wants to come and perform on your farm."

The farm has been in the Stowers family for more than 120 years and is on the registry as a century farm.

"That's really cool," Greg Stowers said. "We're going to bring [Bryan's] history into an agriculture history. He grew up in agriculture, so that's just pretty neat to bring those two together."

The concert will take place on a 30 acre section of the farm, while parking will be located on a 115 acre bean plot. Just one gravel road serves as a path into the farm, and if it rains, the parking lot could turn into a mud field.

"If we get two inches of rain, we're going to have a problem," Greg Stowers said. "It's going to be really muddy and it's not going to be as fun an event as what it possibly could have been."

The chance of rain, however, isn't dampening the spirits of the Stowers' children, Gavin, Breelle and Garon.

"He might want us to come up on stage," Breelle said, hopeful for a chance to meet the superstar.

When asked which song she would want to be part of, she said, "Whatever song he's singing."

In downtown Centralia, local businesses are also preparing for the event. Luther Angell of Angell's Western Wear thinks the experience might draw people back.

"It's actually a pretty nice little town," Angell said. "It will bring some people to town that probably wouldn't be here that will maybe come back later."

The concert has already taken a community effort to pull off. Schools will be closed on Friday due to the heavy increase in traffic. Local police have also worked with the Stowers to plan for the large crowds.

In the end, despite the chance of rain, the Stowers are hopeful their farm can provide memories for those in attendance.

"I want it to be remembered that we brought Luke Bryan and we just had one big party," Greg Stowers said. "That's kind of what his theme behind the farm tours are, is just the old hometown party and getting a lot of people together."

The Stowers encourage those who plan to attend to read through the policies for the event ahead of time. Glass items and grills are not allowed, but chairs and blankets can be used.

The farm is located on Audrain County Road 132, approximately six to eight miles north of Centralia. The parking lot opens at 2 p.m. on Friday.

Heading to the @LukeBryanOnline Farm Tour this Friday? Farm Manager Greg Stowers has specific directions to get you there. @KOMUnews pic.twitter.com/NxxUewwXtg

KOMU 8 Weathercast Kenton Gewecke says a dry forecast is on tap for the event.

Heading to the @LukeBryanOnline concert this Friday in Centralia? It will be dry and feeling like fall. Enjoy! pic.twitter.com/bU4VSsHxGw