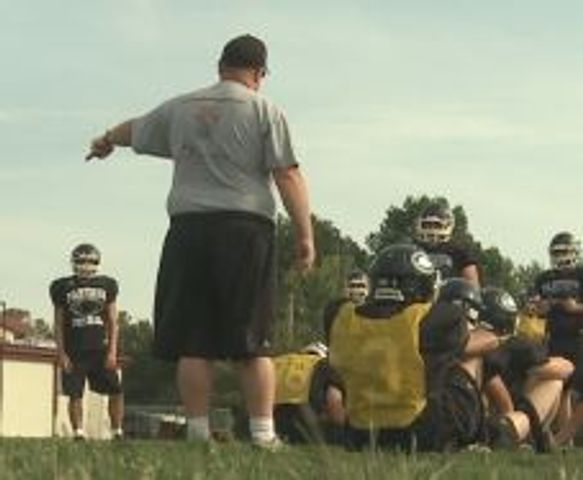 CENTRALIA - It's not unusual for a football team to be united during the game.

It's when the team is off the field and the fans are out of the stands that the Centralia Panthers have the closest bond with each other.

The players talked the coaches into going on a camping trip to Mark Twain State Park in Florida, Missouri before the season. Quarterback Nick Romine said the trip brought the team closer together.

"We knew the coaches hadn't done it in a few years so we thought it would be a good experience to bring the team closer over the summer and to prepare for the upcoming season more by going out and getting some bonding time," Romine said.

For Coach Erle Bennett, it's not about having the most athletic team at his disposal but a team with character.

"First of all, as a coach it's imperative that we are teaching leadership skills and character in athletics and in football," Bennett said. "If we're not doing that, then they just as well get rid of football and sports in general. I mean I think that coaches who don't coach character aren't coaches point blank."

"Coach Bennett is always talking about how football isn't just a game," Romine said. "He's preparing us for later in life to become great men and responsible. It's stuff like showing up on time and getting in the weight room early in the morning over the summer. It all builds character."

Romine said although the trip was only two days long, it created unbreakable relationships.

"It didn't just stop there with us hanging out," Romine said. "I mean now we go to movies, and whenever we're out doing something like going to the park and playing basketball or something, we're all doing it together. You got to know people that you maybe didn't hang out with before."

Bennett didn't even allow his players to use their cell phones on the camping trip because he wanted them to actually get to know each other. Offensive lineman Logan Ross recognizes the lessons learned from the camp translate to the football field and in life.

"Just looking out for opportunities to be the better man like when hitting the running back and picking him back up," Ross said. "I mean just showing kindness like that and good sportsmanship. But off the field, being the best you can be to everyone else around you."

Bennett said he feels his goal of building character in his players was accomplished at the camp.

Romine and Ross said the trip not only built character but built a brotherhood full of memories.

"I'll always remember the guys that I've become closer with, and I mean everybody that went on that trip feels like we're all brothers and we all know each other," Romine said.

"Coach Bennett has made a big impact on my life," Ross said. "I mean he's just been a great coach, leader and man to me, and I couldn't ask for a better coach. Leaving here, I'm going to miss him."