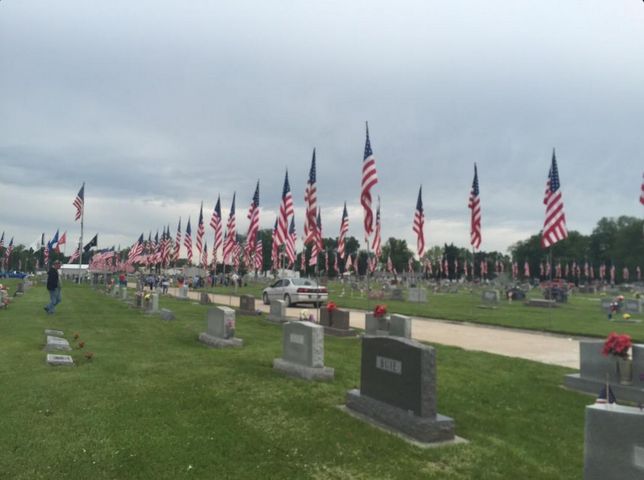 CENTRALIA - Jim Enlow visits the City of Centralia regularly. His wife and daughter are buried there. He said he could never imagine the cemetery ever losing funding despite its recent money struggles.

"I think they have a real deep concern for the cemetery, especially with all these flags, and I have my wife and daughter buried on the corner. So we're interested in whatever it is going to take to keep the cemetery alive," Enlow said.

The city pays the cemetery quarterly payments from its electric fund. Pauley said interest and fuel costs were lower in the 80s so The Perpetual Care Fund covered most of the maintenance costs. Now the board only receives .1% interest off of the $200,000 investment. A Perpetual Care Fund is meant to provide funds to cemeteries over many years.

The cost of cemetery upkeep according to Pauley is $19,000 a year, and the cost increases by three percent every year. He said he was amazed to find out the upkeep costs that much.

"I don't think the city has to fund the cemetery, but I think it's in their best interest because the cemetery here in Centralia is right on the highway, it's very visible, and it's a part of the community, and people look for it to look nice.That's what they expect and they see it as a part of the city, which it is except it's kind of funded a little differently," Pauley said.

Greg Pauley said another problem may be people not donating to public cemeteries as much as they used to.

"I think it use to be more of a tradition. I can remember as a child that my parents and I would travel to different cemeteries where our relatives were buried every Memorial Day. That was just something we did. We stopped and left flowers and would leave a donation," Pauley said.

The Avenue of Flags display brings in a lot of donations to the cemetery but Pauley said it is not nearly enough to sustain the cemetery,

He also said another reason may be because people don't live as close to their relatives anymore because society became more mobile.

Enlow supports the city should continuing supplementing what people don't donate anymore, and said people in the community are willing to help out by mowing the lawn.

"I think people have that much pride in what goes on at this cemetery," Enlow said.

"I am sure they would like for us to pull our own, but again I think like any community it's one of those stepping stones in the community. One of those things that people see as important. And when people come to a community and ask is this a nice place to live and to be' they look at schools, they look at roads, and they look at things like the cemetery. How well is it kept up? Because it reflects on the community I think," Pauley said.