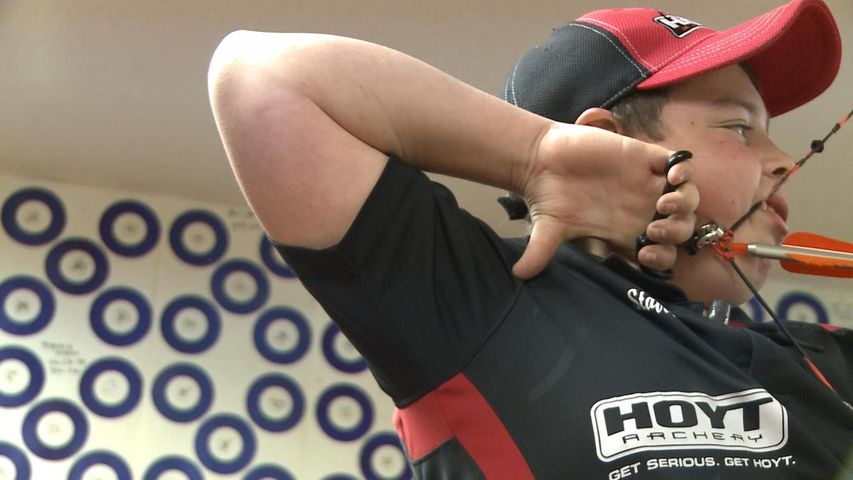 MOBERLY - Hunting has been a part of Hunter Gwinner's life for as long as he can remember.

"He like carried me up there, set me in the tree stand, and he'd hunt, and I'd just sit there and watch," Hunter said about his Dad, Pat Gwinner.

He gave the typical school sports, like baseball and football a shot, but at the young age of seven he picked up the bow, and never put it back down.

"I was going to play baseball, but then I started shooting a lot, and then I was like, 'yeah... I kinda like shooting a lot better,'" Hunter said.

He then made the choice to quit school sports and invest his time in a sport where he could be in full control. Hunter dedicated his life to shooting arrows.

"We get up sometimes at 5 o'clock in the morning, come out and practice before school, he'll go to school, and when he gets out of school he goes back out and we'll practice for a couple of hours," Pat said.

Those early mornings and late night practices add up to about 30 hours a week, basically a part time job, but when Hunter was asked if it felt like work, he just had this to say: "No. No."

He showed signs of a champion at a young age. He shot his first 60-X, a perfect score, at age 11. It didn't take long for that perfection to get him national acclaim. Three years later Hunter would win nationals.

All this success gives him more than happiness, it gives him a future.

"The plan is for him to buy this shop," Pat said about Lucas Archery.

And Hunter doesn't have a problem with it.

"I don't really ever want to leave," Hunter said. "I like my small-town Huntsville."

It seems it's a good thing Pat liked hunting so much; It's how Hunter got his name.

Although it may not be much of a competition anymore, Pat loves seeing his son get better, and Hunter just couldn't imagine life without the bows and arrows.

"I just love it," Hunter said.

Hunter went on to compete at the world stage after winning nationals and placed fourth. He spends more time outdoor hunting just like when he was growing up now that the indoor season is over.