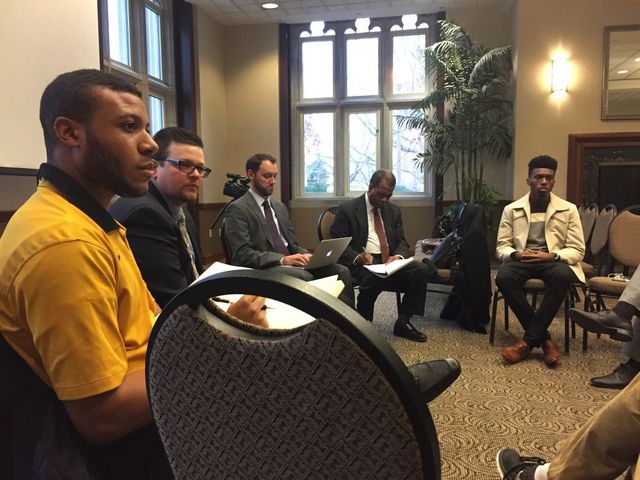 COLUMBIA - The University of Missouri System is hosting a number of forums to help gain input on what people want to see in MU's next chancellor.

Yesterday students got their chance at the undergraduate forum hosted by three men helping to find the next chancellor, along with Missouri Student Association President Sean Earl.

There were seven students in attendance, with representatives from the Legion of Black Collegians and the Black Culture Center.

Sophomore Tyler Brumfield said he wants a chancellor who cares about all of the students on MU's campus.

"I really just want to see a chancellor that's really there for the students," Brumfield said. "Just really being able to advocate for all of the communities at Mizzou and really just bring them together."

Junior Nathan Snodgrass said he wants a chancellor who will have accountability and transparency.

"I really want him or her to address any concerns up front and make them known," Snodgrass said. "I don't want anything swept under the rug."

Many students voiced concerns about the campus climate, saying they want a leader who will make big improvements in race relations, diversity and inclusion.

One student from the Legion of Black Collegians said she wanted to be able to walk through Greek town and feel comfortable.

Sophomore Matt Bourke said he wants the chancellor to have a presence on the campus and to go out in the community and interact with students and faculty.

Tim McIntosh, who helped facilitate the event, said he thinks forums like this one are extremely useful and necessary.

"A theme I'm hearing is someone who will listen," McIntosh said.

Mcintosh said there is no clear timeline for when the next chancellor will be selected, but that everyone is working quickly to make it happen.