3 months 3 weeks 12 hours ago Wednesday, December 11 2019 Dec 11, 2019 Wednesday, December 11, 2019 6:16:00 PM CST December 11, 2019 in News
By: Alexis Godsey, KOMU 8 Digital Producer
Share:
Missouri State Auditor Nicole Galloway
JEFFERSON CITY - Thousands of dollars were missing after an audit of Glasgow, Mo., released last year.
Kevin Atwood, the manager of the city's accounts at the time, has been charged with felony stealing.
"There must be zero tolerance for corruption and fraud by those who are in positions of public trust," Missouri State Auditor Nicole Galloway said in a statement. "My audit of Glasgow helped uncover a serious violation of public trust, and we will continue to partner with law enforcement to pursue justice for taxpayers."
Atwood also served as Glasgow's police chief from 2004 - 2014.
In the audit, more than $4,000 was found missing.
There was approximately $3,200 missing from bulk water sales. An estimated 608,000 gallons were distributed by an automatic distribution system over nearly four years which was estimated to cost $3,800, but only $552 was received by the city. The city administrator was the only one with access to the funds. A check was written to the former city administrator for $1,050 for a "drug buy," without evidence of a buy.

The audit also found that city staff was directed to pay the former city administrator's personal credit card bills. Of the $5,500 paid by the city, nearly $4,000 of the charges were improper or personal in nature. This included online purchases from Amazon and video game subscriptions. The city recouped some of the funds, but $2,700 has yet to be repaid.

"There should be no tolerance for public officials who abuse their position for their personal gain," Auditor Galloway said. "In this case, these issues came to light because a whistleblower came forward to report wrongdoing. The tip resulted in the discovery of missing funds and improper use of city resources." 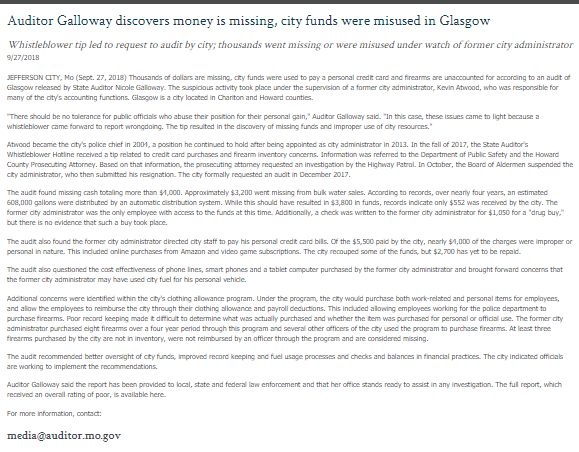