TARGET 8: Check a charity and track where your money goes 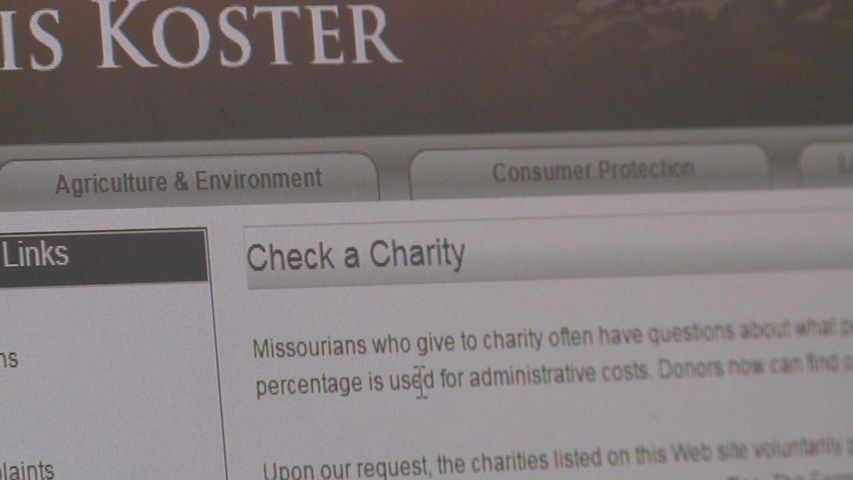 COLUMBIA - With the holiday season right around the corner, charitable giving is popular, mid-Missourians want to know where their money is going.

Target 8 investigators took a look at 20 mid-Missouri charities and what percentage of funds raised goes back to the actual program.

There are many charity check websites consumers can use to get background information on the cause they would like to donate to.

"A fundamental thing consumers need to learn before giving to a charity is the percentage of money going back to the actual activity," said Joe Bindbeutel, chief counsel of consumer protection for the attorney general's office.

Bindbeutel said it is important for mid-Missourians to look at total revenue and how much of the revenue goes to program expenses, which are the funds that go toward what the charity says it does in its mission statement.

The attorney general's "Check A Charity" website advises consumers to donate to charities that are able to give 65 percent or more of revenue to its program.

"It can be very important for consumers to know whether or not they're giving directly to the charity or dealing with a professional fundraiser on the phone," Bindbeutel said. "If you can give directly, give directly and that will cut out the middle man and your charitable dollars will go further."

KOMU 8 News reached out to the treasurer of Birthright to see why its program expenses were so low. The treasurer said the information on the "Check A Charity" was uploaded incorrectly.

Bueller said he must have recorded the program expense wrong on the attorney general's website.

"This is a misnomer. 90 cents out of every dollar goes back to the program, so that 7 percent is not a program expense, it is an administrative expense" Bueller said.

A top official at the Food Bank for Central and Northeastern Missouri said it does so well because the organization strategizes and plans its budget.

Associate Director Bobbie Kincade said, "We have a lot of donors who are not only faithful in giving us revenue, but giving us supplies as well. Supplies range from food to office supplies."

The map below shows each charity researched and the program expense percentage.

The Missouri Attorney General's Office collects monetary information from each charity and non-profit organization and puts the information up on its website.The attorney general's office advises consumers to do their research, cut out the "middle-man" and get background information on the charity prior to giving.

He advises mid-Missourians to call the actual charity, whether it's a national or local one, and check the organization's website and ensure it is not a scam.