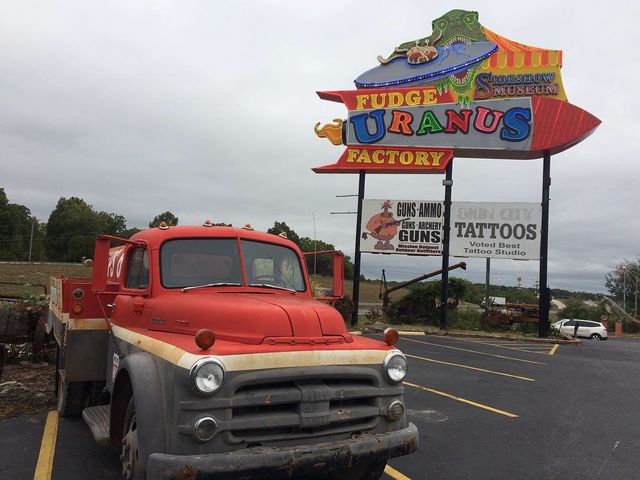 The Uranus Examiner came out Friday, and despite what some may think, it’s publishers insist it's a real newspaper.

Uranus' self-proclaimed “mayor", Louie Keen, decided to open the newspaper after The Waynesville Daily Guide went out of business earlier this year.

"I said 'let’s just put this newspaper out and do something good for this community and show everybody that we do care,'” Keen said.

Even though the place is called "Uranus, Missouri," no one actually lives there. It's like a strip mall.

Keen redeveloped Uranus from a strip club to a family-friendly tourist stop along former historic Route 66. He made the change three years ago.

“I was like, ‘we’ve got to do something else with this space,’” he said. “I was like ‘I’m gonna do this. I’m gonna put this fudge factory in’, so then it’s just exploded from there. Uranus exploded.”

He’s trying to bring the area back to its roots.

Patricia Fadgen, of St. Robert, said it is a great place to bring the whole family.

“If anyone has ever been around brothers or sons or husbands to love to tell jokes all the time, bring them here,” she said.

Fagden said she is advertising her business in the new paper and she thinks this is a good way to keep newspapers alive.

“I think it’s a great way to keep printed paper running because it’s becoming a thing of the past,” Fadgen said. “Everyone wants to do internet and no one wants a printed paper.”

Keen said it's a labor of love.

“If it was about money, I would have stopped a long time ago and just taken money,” he said. “I'm trying to build something crazy.”

The former managing editor of The Daily Guide now holds the same position at The Uranus Examiner. Keen originally hired her for a different job, but after the Guide closed down, she got promoted.

“Newspapers and news sources are a dying thing and they shouldn't be because what you end up with is an uninformed public,” Sanders said.

She said she has a lot more support now.

“It was really rough running a newspaper without a staff,” she said. “I did everything.”

The Examiner has received worldwide attention from the news industry.

“I never in a million years dreamed that it would be so controversial,” Sanders said.

“At the end of the day, the name really doesn't matter,” Sanders said. “We're putting out a product that’s got the news in it and it’s got what you're looking for and it’s a good thing.”

Keen said there will always be "haters and trolls."

“Who cares,” he said. “They're not upset at the name. They're upset because I'm the one doing it.”

Sanders said the Examiner is “not a parody newspaper.”

“I encourage people to wait and see what it is,” Sanders said. “People are, because of the name, are just assuming that we're going to be making fun of everything under the sun and we're not.”

Still, there will be humor in it, she said.

“You can't work at a place like this and not have a sense of humor,” she said.

Sanders said the paper will initially be in newsstands only, but delivery will start Nov. 16.

The Uranus Examiner is free for people living locally, but residents should put themselves on the paper's mailing list to make sure they get a copy. People living outside the area, can get the digital version for free. The first issue is 28 pages.