Chicago Defense Too Much For Bradford and Rams 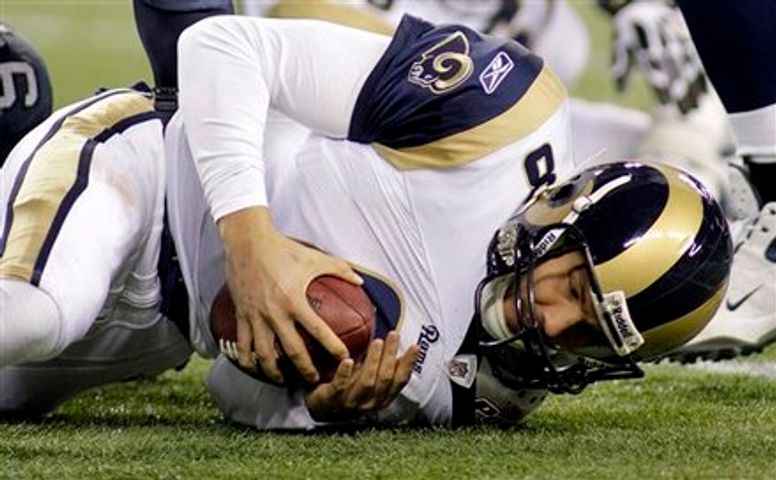 CHICAGO -- Major Wright saw Sam Bradford zeroing in on Danny Amendola and knew where the ball was headed.

It ultimately wound up in the end zone, and that was just fine with the Chicago Bears. They got back to winning thanks to their defense, with Wright coming up with the biggest play.

He returned an interception 45 yards for a touchdown, and Chicago beat the St. Louis Rams 23-6 on Sunday.

The defense came to the rescue against the Rams (1-2), holding them to 160 yards and sacking Bradford six times. That was enough on a day when Jay Cutler struggled, and the Bears (2-1) bounced back after an ugly loss to Green Bay the previous week.

The Bears had just kicked a field goal to extend their lead to 13-6 in the fourth quarter before Wright made his key play. Bradford had been hit hard by Israel Idonije and Stephen Paea on the previous play when Tim Jennings deflected a slant intended for Amendola.

Wright caught the ball at the 45 and ran untouched to the end zone, making it a 14-point game and finally giving the Bears some breathing room.

"Sam Bradford was looking his way the whole time," Wright said. "As we were watching film, he is not the type of quarterback that is going to look one way and go back the other way. He was honing in on that side and I was like, 'You know what, let me take a shot over here,' and I ended up taking a shot over there. ... (Jennings) tipped it up and me being in the right spot at the right time (I) took it in."

It wasn't exactly the sort of showing the Bears were looking for after that brutal 23-10 loss to the Packers, but they got by because the defense did its part. For the offense, well, that's two bad outings in a row.

One positive note for the offense was Cutler appearing to keep his composure in this game. Considering he got sacked seven times, threw four interceptions and berated and bumped left tackle J'Marcus Webb on the sideline, that was an improvement.

Otherwise, there weren't many positives for him.

"Not every game is going to be 41-21," Cutler said, referring to the season-opening win over Indianapolis. "We're not going to come out every game and blow the doors off offensively and defensively. This is what is going to be more likely week in and week out."

Cutler completed 17 of 31 passes for 183 yards. He was sacked twice and threw an interception to Cortland Finnegan, who also delivered a shot after the game.

Asked what he saw from the Bears' quarterback, he said, "Not much. Not much. I think he had 190 yards passing, something like that. And no touchdowns. Typical him."

Brandon Marshall had trouble hanging onto the ball at times and wound up with five receptions for 71 yards after catching just two passes the previous week. Michael Bush ran for 55 yards and a touchdown with Matt Forte sidelined by a sprained right ankle.

"It's not how we wanted to perform, but got a W," Bush said.

Credit for that goes to the defense.

Idonije had 2½ sacks, and the Bears simply made it miserable for Bradford, who was 18 of 35 for 152 yards with two interceptions.

Steven Jackson managed just 29 yards rushing after missing most of the previous game with a groin injury and sitting out practice during the week, and Amendola had five catches for 55 yards after tying a club record with 15 catches for 160 yards.

"We definitely didn't play well today," Bradford said. "Give them credit, they played us tough. But I think there are a lot of things when we look at the film that are going to fall on us. Things that we were in control of and just didn't handle. It was a tough game, a lot for us to learn from and move on as a group."

Protection might be at the top of the list. Then again, the Bears had something to do with it, too.

For all the questions surrounding their defensive line, the results so far are good. They came in tied for second in the league with eight sacks and added to their total with another balanced effort.

It's not just Julius Peppers being disruptive; he's getting help, too.

"We're fighting for the sacks," said Paea, who had one. "It's not just one person on the quarterback. It's two or three."

The effort on defense was enough to overcome a subpar performance by the offense.

When the Bears had chances, they simply didn't take advantage. With Chicago leading by four early in the final quarter, a 21-yard scramble by Cutler put the ball on the 6. But the Bears settled for a field goal to make it 13-6 after he overthrew an open Devin Hester in the end zone, the ball going through the receiver's hands as he tried to make a leaping catch.

That drew more groans from an already weary crowd, but the Bears came out on top.