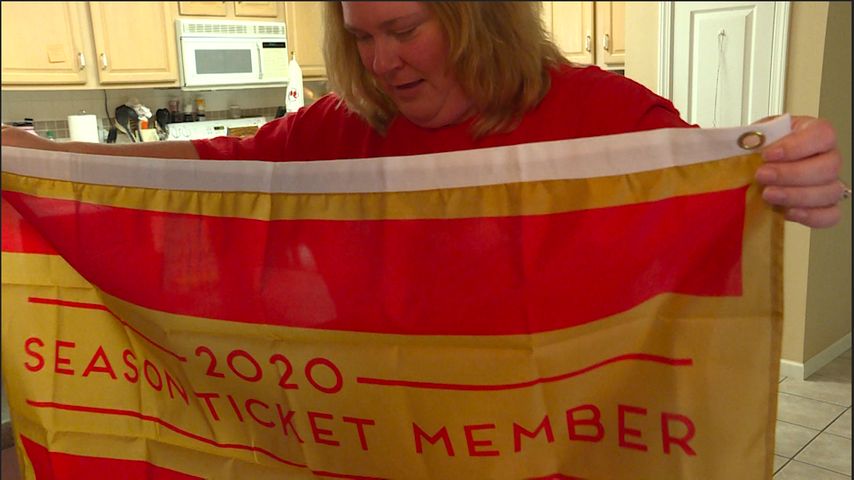 BOONVILLE — With the uncertainty of the 2020 NFL season, Chiefs season-ticket holders won't be guaranteed tickets to every home game this year.

The Chiefs announced in August that it would start the season with a capacity limit of 22 percent.

After the announcement, Chiefs season-ticket holders were notified that the payment for their season tickets would be rolled over to the 2021-22 season.

"At the same time, those tickets being pushed off for next season are locked in at this season's prices," Loesing said.

This year, season ticket members will have to buy tickets for individual games. The Chiefs will release three home games at a time, giving first priority to the higher-tenured season ticket holders.

Loesing said she believes this could be a way for the Chiefs to take the capacity week-by-week to see if at a certain point they don't allow any fans in the stadium this year.

"I'm sure they're doing that in preparation for maybe having to shut the whole thing down," Loesing said.

Before the Chiefs announced the individual ticket bundle plan, Liddle thought seats would be reserved exclusively for season ticket members like him.

"I didn't see it coming. I thought as a season ticket holder that non-season ticket members wouldn't get the seats," Liddle said. "Instead, they took them away from people with less tenure."

Even though Loesing has had season tickets for over a decade, she was still concerned that people with higher tenure would sell out the stadium before she had a chance to buy them.

Loesing attended the two training camps at Arrowhead Stadium that season ticket members were invited to watch, while socially-distanced from each other and the players.

"To arrive at Arrowhead with that kind of game day mentality and have no one there after we're Super Bowl Champions—it was a very surreal feeling," Loesing said.

Loesing has tickets for the first two home games against the Texans and the Patriots. She was hesitant to buy tickets to the third game in the bundle since she wants to see how the limited capacity works out before committing to more games.

"I'm afraid that things are going to progress to a point where there will be no fans," Loesing said. "I think they have the foresight for that as well, that's why they only did three games [at a time]."

As for Liddle, he said he won't be attending as many games as he usually does this season.

"I probably won't go to nearly as many games," Liddle said. "If they do a full schedule, I'll probably go to three or four [games] instead of eight."

Even though Liddle won't be attending as many games this year, he looks forward to what's ahead for Chiefs Kingdom.

"It's just really unfortunate, you know," Liddle said. "Everybody's just trying to figure it out and manage their way through it and, I mean, next year things will look better."

For Loesing, she's just happy she was able to secure a seat for the Thursday night opener.

"We all knew, like, in the pit of us that probably we would not see a game," Loesing said. "The fact that we can, or have the opportunity to is just tremendous."

To find out more about how the Chiefs are taking precautions with fans in attendance this season, click here.