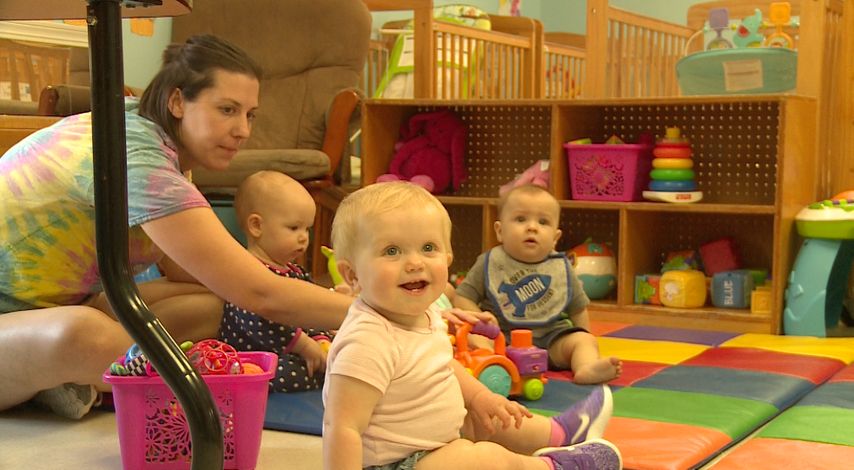 JEFFERSON CITY - New regulations for unlicensed at-home day cares start August 28, and some are worried those regulations will put pressure on the already competitive child care market in Missouri.

Nathan's Law has been circulating through the state legislature for years, but this year, it finally crossed the finish line.

The law was named after Nathan Blecha, a Jefferson County infant who suffocated and died in 2007 while under the care of an unlicensed at-home day care that housed nine other children.

Aspects of Nathan's Law were incorporated into House Bill 397, a hefty piece of legislation aimed at protecting children, signed into law by Gov. Mike Parson in July.

The law, in part, limits the number of children that can stay at an unlicensed at-home day care. Before the law was passed, providers could take care of four children, plus however many blood relatives they wanted.

In addition, only three of the six children allowed may be under the age of two.

Child Care Aware of Missouri was one advocacy group that pushed for the legislation. Robin Phillips, the group's CEO, was glad Gov. Parson chose to amp up the regulations.

"It’s a monumental change to licensing in the state of Missouri," she said.

Phillips said the previous regulations, which allowed for providers to take care of an unlimited number of family members, was "the biggest loop-hole for a number of years" in unlicensed at-home day cares.

She said the previous regulations were too loose and brought up safety concerns for children staying in those day cares.

While many day cares support the new regulations, some are worried about the effects it may have on the availability of childcare in an already swamped market.

Nena Koelling has worked in the childcare business for about 30 years. She and her husband own Learning Connection Child Development Center in Jefferson City.

Learning Connection is licensed to take care of 99 children, and Koelling says her center is almost always full.

"Every once in a while we have an opening here and there, but pretty much we do stay at full enrollment," she said.

It is not unusual for day cares to be booked up, especially for younger children.

Data from Child Care Aware of Missouri say this year, about 150,000 total spaces were offered in licensed child care programs across the state.

The same data show the need for childcare, just for children in Missouri under the age of six, is almost double that number.

Koelling said because demand is so high, parents have to start looking at childcare options early.

"Typically, you have to get on a waiting list almost as soon as you find out you're pregnant to be able to get into a place," she said.

Phillips agreed and said Child Care Aware of Missouri has gotten some feedback from parents who are concerned about losing their child's spot in an at-home day care.

"There is not enough child care for working families with young children in our state, specifically in rural areas," she said.

The Department of Health and Senior Services said in a press release that some regulations could also impact licensed day care providers.

Lesa Scheiderer, who operates a licensed day care in Salisbury, said the regulations are "ridiculously frustrating."

The DHSS press release says licensed day care providers have to count all children toward the license capacity, even if the children's family owns the facility.

Scheiderer said she will have to turn some parents and their children away in order to comply with the new regulations.

She added she has called state legislators to tell them about the negative impacts the law may have.

"Their intentions are good, but they have no idea what they've done," she said.

While the spots for child care are competitive, both Phillips and Koelling agree quality comes before quantity.

"Until you get some of that infrastructure redefined and improved, then you can't really add on more quantity," said Phillips.

House Bill 397 also increases the penalty for someone who violates the law from an infraction to a misdemeanor. The DHSS can also sue the provider in a circuit court if a child was put in imminent bodily harm while in his or her care.

Parents looking for child care can visit the DHSS website find a child care provider within their zip code.

Editor's Note: This story has been edited to include information from a DHSS press release.