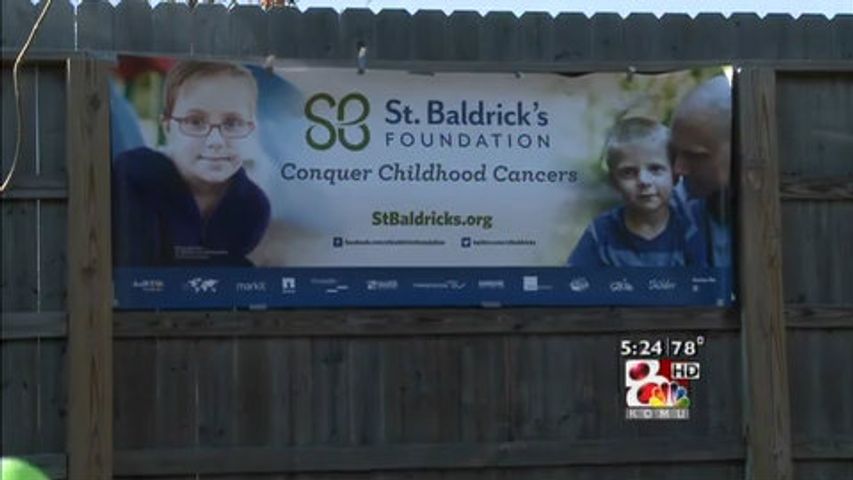 COLUMBIA - Last year, five-year-old Phoenix Bass attended a local St. Baldrick's event in the midst of undergoing chemotherapy. This year, she returned as a survivor.

St. Baldrick's is a national foundation that raises money for childhood cancer research. Founded in 2001, St. Baldrick's raises millions nationwide every year. Participants shave their heads to show solidarity and support for people whose lives have been impacted by cancer. On Saturday, April 13, the MU School of Medicine led local participants for the third year in a row.

Columbia's Phoenix was recognized as an "Honored Kid" at last year's main St. Baldrick's event. In 2011, she suffered a seizure while visiting close relatives in Kansas City, an event that her mother, LaDawn Cole, said was the first sign that something was wrong. After she was stabilized at Center Point Hospital, Phoenix was life-flighted to Children's Mercy in Kansas City, where doctors discovered a cyst on her brain.

While doctors successfully removed the cyst in late December, the outcome of the surgery was not so simple for Phoenix. On January 13, 2012, Phoenix and her family returned to Children's Mercy for a follow-up appointment. Cole recalled watching her daughter's doctor walking into the meeting, followed by her oncologist, neurologist, a social worker and a case worker.

"Then I thought something's not right," Cole said. "It doesn't take this many people to give you good news."

The doctor told them the tumor was malignant; Phoenix had cancer.

"I don't know the best way to describe it," Cole said. "You're standing and the floor just disappears and you fall, and it's like nothing is around you. You can't grab ahold of anything. It literally felt like my whole world had ended. It never crossed my mind that she was going to have cancer."

The tumor fell into the primitive neuroectodermal family of tumors (PNET), a highly aggressive form of cancer. Phoenix underwent six weeks of full brain and spine radiation, followed by chemotherapy, which Cole said was the rough part.

"She left her last day of radiation and she was still pretty healthy," Cole said. "She lost 15 to 20 lbs. during chemotherapy. You know, at barely 35 lbs., when you're losing so much weight, you're literally withering down to nothing."

Cole said she found support through doctors and nurses, as well as other families going through the same experience.

"They knew," Cole said. "They'd seen it. That's why I think events like these are so important, because I know the pain, I know the feeling that there's nothing that you can do to help your child except be supportive."

At this year's St. Baldrick's event, Phoenix danced to the music and got her face painted. It was a complete turnaround from last year's event.

"Last year was overwhelming in the best way," Cole said. "We saw all this support here, we got to meet wonderful people, but it was still very difficult because we were in the middle of treatment. This time we have enjoyed it 110-percent because she's in remission."

While Cole admitted the future can be unpredictable, her family's focus is on the present.