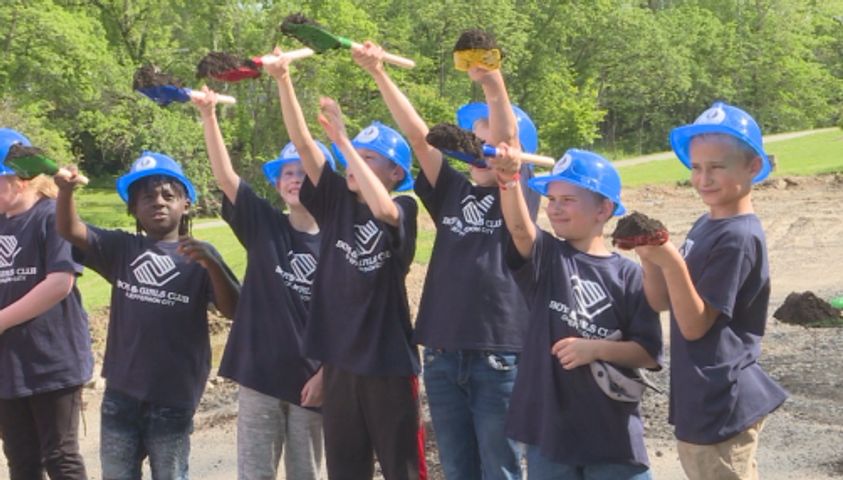 "When we got to break ground, it was very exciting and very fun to do because once you get that over your shoulder, now you feel like you just started construction," said Shiloh Blunt, an 8-year-old at Boys & Girls Club.

Children from the Boys & Girls drumline led the ceremony with a procession from the club to the park site.

Todd Spalding, Jefferson City director of Parks and Recreation, said the community has been waiting for this park for years.

"It's been a long time coming. We started our master plan about two years ago. Early on during that process, we learned that there was a real need for a park in what we call our ‘core’ area,” Spalding said.

The park is undergoing a total renovation. It will cost about $3 million. This includes costs for infrastructure, play equipment, restrooms, shelters and a splash park.

Spalding said the sales tax and fundraising are funding the park.

"A local Jefferson City arts foundation raised about $60,000 to put a splash park in there," he said.

The park is also walking distance from the Boys & Girls club.

Stephanie Johnson is the chief executive officer of Boys & Girls Club of Jefferson City. She said children from the club will be able to walk to the park and have a safe place to enjoy themselves.

"It's especially exciting many children who attend the Boys & Girls Club because so many of them live in this area," Johnson said.

The park will be in the city's Lafayette and Dunklin area. This is the most populated area in the city with almost 2,400 households according to Spalding. The area used to have a “highly functioning” park with a pool and other amenities, but the park lost much of its equipment over time.

“That area had the most people within a 10 minutes walk in the city, and it had the least amount of park amenities. We knew right away that we needed a park there,” Spalding said.

Some community members have been waiting for a new space for 40 years.

Johnson said this park will also be an escape for children and families who live in poverty.

"A lot of children who live in poverty in Jefferson City don't get to go to the beach in Florida. They don't get to go to New York City or California. For them, their vacation destination is their local park. It's so important that we make that park as incredible as we possibly can," Johnson said.

This area is known for its history. It was called the “Foot District," a historically black with many people and businesses. However, urban renewal took away a lot of the businesses and amenities.

“There is a real need for the park to be put there in its former glory,” Spalding said.

He also said national data shows the community will benefit from the park by improving the community's quality of life.

"The goal that we have as a park system is to be able to give people play and recreational opportunities within a 10-minute walk. There was a really highly populated area in this Lafayette, Dunklin corridor that had to go longer than 10 minutes to get to any kind of play," Spalding said.

"It showed us very clearly that this community needed a park, and we needed to make that right."

The park district has held several public hearings and sent surveys to get community opinions.

Shiloh said being part of this moment for the community was a big deal for him.

"It feels like I am the most important kid in the world," Shiloh said.

The park is located on 725 Marshall St. The city expects it to open in November.