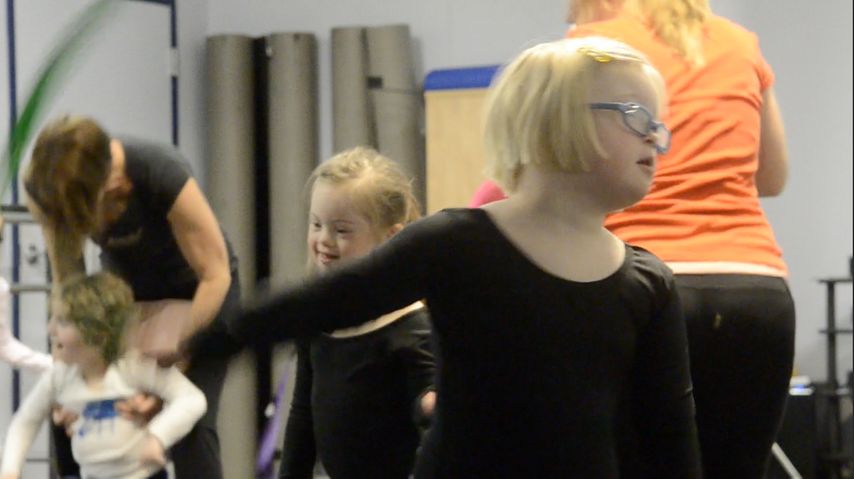 COLUMBIA - It looks like a routine children's ballet class at first. The elementary-age students do some of the basic dance moves - a plié, a chasse and a pirouette - their little feet and legs trying to match their instructors' direction.

Missouri Contemporary Ballet's DanceAbility class is structured similarly to a traditional beginner's ballet class but with a few key differences. The instructors took three months to develop a class tailored to children with developmental or physical disabilities.

The genesis of the class was a chance encounter. Physical therapist Jennifer Highbarger and Missouri Contemporary Ballet school director Caroline Euker bumped into each other in downtown Columbia last summer. Highbarger, who had taken an adult ballet class at the school, works with special needs students at Columbia Public School District. She knew that one of her students with Down syndrome had taken a regular dance class at the studio. That got her thinking: Would the school do a class just with children with special needs? Euker was thinking the same thing.

"I thought it would be great for the school and these children," Euker said. "We could give more kids the opportunity to learn dance."

So the two got to work, researching similar programs and recruiting parents and volunteers to help out in the class. Part of the challenge was to develop a routine designed for children with special needs, Highbarger said. Instructors rely on a lot of visual cues for tasks. Many children with developmental disabilities may need multiple senses to understand a task. So, for example, each child wears a square of red tape on the right slipper and a blue square on the left. That way, the visual stimulus is an additional cue to the instructions of which foot to move.

"A lot of these kids need visual input, auditory input and physical input instead of just one input," Highbarger said. "That helps them a lot."

They also had to keep in mind the pacing of a class, carefully explaining a particular step or move because it typically takes children with special needs more time to process instruction. The key is making sure every student feels involved and not left behind, Highbarger said.

"A lot of parents told me that they had tried to have their children in a typical class and the kids just struggled," she said. "It was hard for the parents to see that. There are things (instructors) can do in these class - being patient, how you give instruction - that can make a big difference."

Ten children are in the inaugural class, which runs through March 5, and more than a dozen are on a waiting list for the next session, instructors said. Details have not been determined, but the school plans to expand to more classes, Euker said. At some point, Euker would like to see DanceAbility classes for all ages held year round.

Highbarger wasn't sure how the class would go, but after the first class, she left more than satisfied.

"You know the term heartwarming? My heart was warm for days," she said.