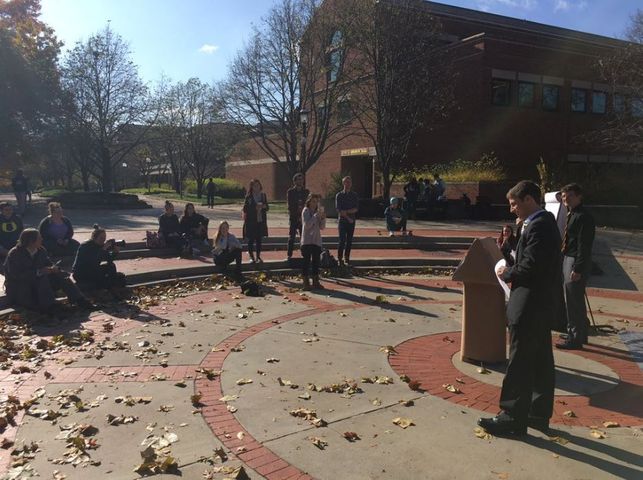 MEAC was not satisfied with Choi's response, so it put on a demonstration in protest at Speaker's Circle.

Ten minutes before every hour, the group had an "oil tower" shoot "oil," which was really chocolate sauce.

"Anyone could just come out here and spew facts about the terrible effects of climate change and why Mizzou should divest from oil," MU student Drew Anderson said. "But the fact they put it into a format such as this made it more entertaining to watch. Really driving their point home with satire made it very effective and got a lot of students to come check it out."

After MEAC reached out to Choi, it received a letter back which explained MU, and much of the developed world, still highly depends on the energy provided by fossil fuels.

"We cannot ignore that our own society and campus communities remain dependent upon the energy provided by fossil fuels," the letter said. "From the electricity to power cutting-edge research labs and facilities to the fuel that powers the helicopters that bring critically injured patients to University Hospital for world-class trauma care. It would be impossible to function as an institution or as a society without the energy currently provided by fossil fuels."

The letter went on to highlight some of the investments MU has made into sustainable energy, including $76 million to reduce greenhouse gas emissions, $43 million to replace a power plant at Missouri S&T which cuts 25,000 metric tons of carbon dioxide emissions per year and a $20 million investment in solar energy.

But MEAC wasn't satisfied, and still wanted the University of Missouri to divest from fossil fuels.

"We're having a bit of a spectacle of drilling for oil in Speaker's Circle," MEAC member said. "This is just to produce awareness of the fact that the university has over $10 million invested in fossil fuel companies and we'd like to them to divest."

The protest consisted of a spokeswoman, an oil executive and an intern preparing to begin drilling in speaker's circle for oil. They played the part of supporting this new investment in oil while stating facts which were counterintuitive. They began the skit on the :50 of every hour from 11 a.m. to 2 p.m. to catch students as they were walking between classes, and ended with a the "oil" spewing from an "oil tower."