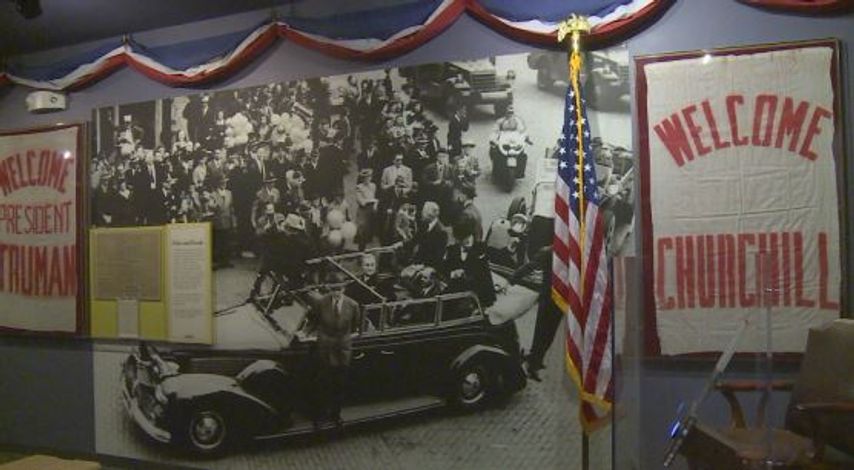 FULTON - For those interested in politics, a museum in Fulton is a “must see” for historical displays of one major political figure.

A new exhibition, which opened Thursday, allows visitors to view the original drafts of Winston Churchill’s  famous “Sinews of Peace,” better known as the “Iron Curtain” speech. On the drafts you can find shorthand markings and edits dictated by Churchill to his secretary Edith Nina “Jo” Sturdee.

Lord Alan Watson, the former president of Parliament’s Liberal Party, traveled to Fulton to speak on his studies of Churchill as discussed in his book “Churchill’s Legacy: Two Speeches to Save the World.”

“He didn’t have a ghost writer,” Watson said. “He wrote all of his speeches himself.”

Watson said Churchill wrote the speech on his train ride over to Fulton. According to a museum display, Churchill and President Harry S. Truman, who rode the train with the British Prime Minister, also enjoyed whiskey, poker and each other’s company on the train.

Churchill’s granddaughter Edwina Sandys said she remembered him constantly working, even when he was spending time at the family’s country home.

“Some men go to the office and then they come home, but the office came to him whenever he wanted that,” she said.

Sandys said people may not realize Churchill’s passion for painting.

“I used to watch him paint,” she said. “Mostly it would be outdoors, he liked doing landscapes.”

Sandys said she and her grandfather share this passion for art. Her sculpture “Breakthrough” is located outside the National Churchill Museum and is made of pieces of the Berlin wall.

Lord Watson will speak with on Churchill’s legacy at 6 p.m. The event is free and open to the public.